Trends in teen lit: Swindlers are the new vampires 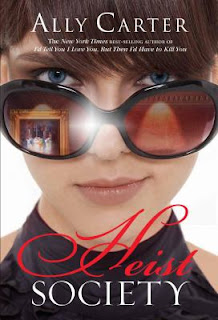 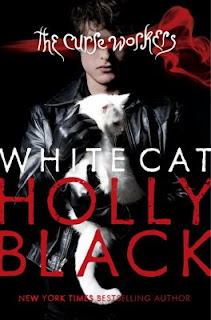 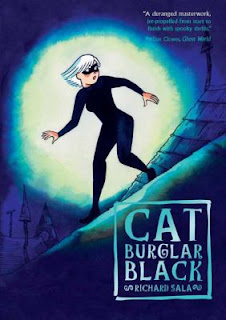 So obviously, the beginning of summer reading has completely bowled me over. But I'm back on my feet and in a fighting stance, so hello again! I'm here to announce a new trend: classy, old fashioned criminality. Actually, I'm not sure "young criminals" is as popular a theme as I would like it to be, but just today Cat Burglar Black, White Cat, and Heist Society all passed across my desk, putting me in mind of the ragtimey soundtrack to The Sting with Robert Redford.

Cat Burglar Black, by Richard Sala, is arguably part of a genre-within-a-genre: the education of young criminals. It's a graphic novel in which a sticky-fingered, white-blond orphan is rescued from a Dickensian orphanage by a strange relative. Then she's promptly deposited in a mysterious school for girls that only has 4 pupils, where it seems she is expected to play an important role using the extralegal skills she developed at the orphanage.

It has an odd sense of humor to it. It's sort of a parody of all those novels about con artist orphans (Do those novels really exist, or am I just thinking of the movie Candleshoe?), but it's more awkward than funny. I had to keep checking to make sure it wasn't by Joann Sfar. It also reminded me of the movie St. Trinians, which is also about an English girls school where the girls learn the criminal arts. Sidenote: St. Trinians is based on a series of drawings by cartoonist Robert Searle. Obviously, Robert Searle isn't part of the current trend in YA books that I am attempting to posit, but the movie based on his work is evidence. So is Catherine Jink's Evil Genius.

White Cat, but Holly Black, imagines a world like ours, except with "curse workers," or people who can have a magical affect on you by touching you with their hands. In this world, everyone wears gloves and those with magical abilities are called "curse workers." Because curse work--all kinds, even nice kinds, like luck work--are illegal, most curse workers are associated with organized crime. Cassel's family is no exception, although he's an exception in the sense that, unlike the rest of his kin, he has no magical abilities. What he does have is a crush on the heiress to a crime family throne, a guilty conscience, and a sleep disorder that might just get him killed--or at least kicked out of boarding school. Cassel is also a bit of a con artist, and the book teaches you a few tricks of the trade. At the end, Black references books like Games Criminals Play and The Big Con, which was also reviewed on Guys Lit Wire, and which is cataloged under the subject heading "Swindlers and Swindling," which is adorable.

While Cat Burglar Black was a bit odd, White Cat was brilliant. It was an unusually dark portrayal of toxic family relationships that I believe will resonate with teens who have had to distance themselves from family members. It also confused me in a good way by not immediately explaining the setting--so like the world I live in, but just a bit quirky. Of course I'd be remiss if I didn't at least point out the whitewashed cover. Grrrrrrrr. But that's not the author's fault. My only possible complaint is that I didn't love the heiress the way Cassel did. I love it when authors make me love the bad girls, like in The She, in which I fall in love with a girl who actually mocks people with disabilities. Are you shocked? I know! But it's that compelling of a narrative!

Now you may wonder why I haven't reviewed Heist Society, by Ally Carter. That's because there are so many holds on it that I felt bad reading it before the teens got their hands on it, so I sent it out into the world. I'll let the holds speak for themselves.

Now I'm trying to figure out why I'm such a fan of these books about organized crime. I suppose I'm a librarian and I like things to be organized--even crime. I like clever criminals and anyone who is calculating and hip to human nature. And I like anything that celebrates brains over brawn. I fear I may be having a bit of a reaction to all the stories about mindless teenage crime: See here! Teens can commit mindful crimes! Anyway, I think teens love organized crime, from the Yakuza to the Pirates of the Caribbean, and books like this encourage them to sharpen their wits. So one question: would it be a bad idea to do a program about cons?
Posted by xemilyx at 5:51 PM