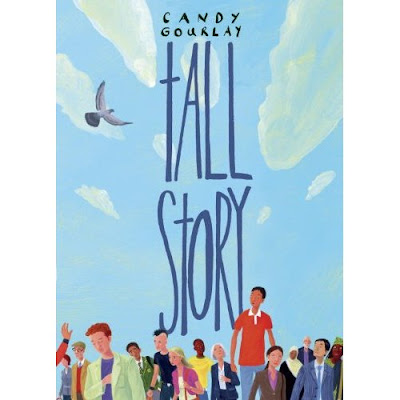 At the children's literature discussion last Wednesday, Cheryl read the first few sentences of Tall Story, and someone who hadn't read it was like, that narration is so teenage boy:

"Rush hour.
So many armpits, so little deoderant. The whole world is heading out to Heathrow to meet long-lost relatives. I am wedged between the tummies of the two fattest men in the world.
Rank" (1).

Guess what? The narrator is a girl! I loved Andi for being a 13-year-old girl whose main problem is that her parents are making her switch schools just when she made point guard on the basketball team. Her problem is not, "Oh no, all my girlfriends are getting into hair and make-up and boys and I just want to be a tom boy." Thank you, Candy Gourlay!

However, it took me a little while to warm up to Andi. I thought it was cool that she was a pint-sized point guard with spikey hair who didn't mind being mistaken for a boy. But I didn't click with her instantly.

What drew me into the book was her brother, Bernardo, who lives halfway around the world in the Philippines and is 8 feet tall. Eight feet tall! Andi's mom wants Bernardo to join her new family in London, but you know how immigration is. The paperwork finally goes through near the beginning of the book. This is great news, but complicated, because 1) Bernardo's mom doesn't know he's 8 feet tall, and 2) the people of the town where Bernardo lives believe he's their savior. How can the savior abandon his people?

The chapters alternate between Andi's and Bernardo's perspectives, and Bernardo's side of the story is what won me over. He describes a town carved out of the mountains by giants, populated with larger-than-life tailors, barbers, and witches. While Andi tells a straightforward story of adolescent angst, Bernardo is a secretive, sensitive narrator with a strange, almost magical story to tell.

The only problem with these alternating chapters is that they don't go in chronological order. The novel starts with Bernardo and Andi meeting at the airport. I thought of this as sort of the midpoint of the narrative. After starting in the middle, the narrative goes back a few years to the last time that Bernardo saw his mom, then it goes forward a few years to when Andi finds out that her family is moving. And it keeps zig-zagging around like that so it wasn't always clear when things are happening.

At other times, the author uses the alternating view points to great effect. When Bernardo shows up in England, we see his velcro suit and sandals with black socks through Andi's eyes and we hear his broken English through Andi's ears. But in the next chapter, we get to hear Bernardo's true voice, the way he sounds in his head. It's a multifaceted look at the immigration experience. Very smart.

By the end of the novel I was racing through the short chapters. There were near-death experiences, rabid dogs, earthquakes, curses, and season-ending basketball games. I wish the beginning of the novel introduced the themes and plot lines a little more elegantly, only because I really want kids to stick with this story. What the book lacks in narrative structure it more than makes up for in voice and vision.
Posted by xemilyx at 5:27 PM