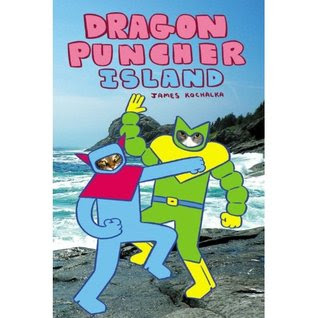 Here are the ones I care about:

I'm thrilled that Dragon Puncher Island has been nominated. It's one of the most delightfully weird books I bought for my library this year, popular across grades. If you haven't read the series (the first one is just called Dragon Puncher), it involves a catlike creature who hunts dragons and a small furry creature who wants to be the catlike creature's sidekick. What the furry creature brings to the table: a spoon, called spoony, with which he will beat the dragons.

Best Publication for Kids (ages 8-12)
The All-New Batman: The Brave and the Bold, by Sholly Fisch, Rick Burchett, and Dan Davis (DC)
Amelia Rules: The Meaning of Life ... And Other Stuff, by Jimmy Gownley (Atheneum)
The Ferret’s a Foot, by Colleen AF Venable and Stephanie Yue (Graphic Universe/Lerner) 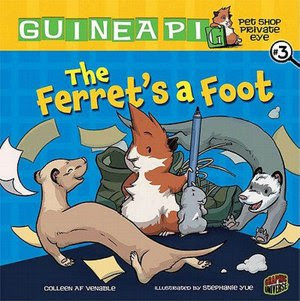 I was thinking about Colleen Venable's Guinea P.I. series last night as I read one of the Joey Fly Private Eye graphic novels. Unfortunately, reading the Joey Fly GN was like reading one of those kids activity books about fire prevention or Halloween safety. It wasn't even trying to teach me anything, but the heavy handed narration made me feel like I was supposed to learn something. Maybe in this case, it was a lesson in the P.I. trope. Anyway, Guinea P.I. is the opposite: Hilarious! Kids can love a grumpy guinea pig solving mysteries whether or not they get the noir motif. 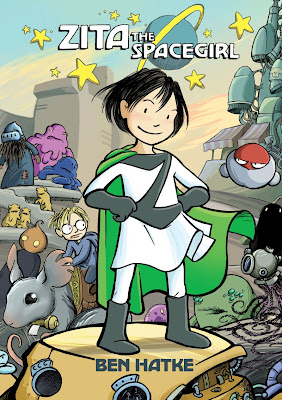 Zita the Spacegirl is another favorite from this year. Something crashes out of the sky and presents Zita and her friend with a remote control that has one tempting red button on it. Zita presses it and her friend rockets to another dimension. When I think of the book, the first image that pops into my head is Zita hiding in the woods, hugging her knees and crying, right before she goes back to the scene of the crash and pushes the button again, following her friend into the unknown.

Now I really need to get my hands on a Princeless. Usually I wait for a TPB, but this one has more buzz than a hornet's nest, and it's, like, so perfect for my library. And I've never heard of the Beauty and the Squat Bears, but now that I've read the synopsis, I'm fascinated.
Posted by xemilyx at 4:56 PM