Review: Legends of Zita the Spacegirl by Ben Hatke 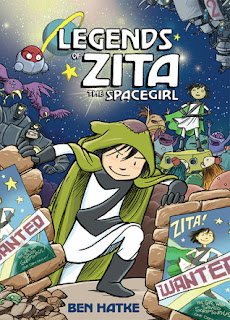 Here's the short version of my review: Is the second Zita book as awesome as the first one?  Yes.  And since the first one was pretty much my favorite children's GN ever, I'm just going to try not to gush too much.  Ready?  Go.

In the first installment of Zita's adventures, she accidentally zaps her friend to another planet.  Her search for her friend drives the plot, and while she ends up saving the planet, that's mostly a bonus.

However, in this second installment, Zita is famous for her planet-saving.  Everywhere she goes, aliens beg her for autograph.  So when a robot shows up who can do a remarkable impression of Zita, our heroine is happy to take the afternoon off. Unfortunately, by the time the afternoon is over, robot Zita has accepted a mission to save another planet and real Zita's friends have taken off without her.

Despite the "spacegirl" in the title, I read the first Zita book as a fantasy.  When Zita pressed that irresistible red button and followed her friend across the universe, it was like Alice falling down the rabbit hole or Lucy pushing aside the last fur coat.  There was no real scientific explanation for how Zita traveled, and when she arrived, there were alien lifeforms wearing top hats and speaking in Cockney accents--not to mention talking animals and a man with a magical flute.  As a regular fantasy reader, I felt very much at home.

The second book is unmistakeably sci-fi--not because there's any hard science, but because there are  recognizable sci-fi scenes: Zita in an escape pod shooting past stars, robot police stomping down hallways, maverick pilots repairing clunky spacecraft.  There's a beautiful cuteness to all of these scenes that seems Japanese-influenced to me.  This could be a superficial observation.  I see many-tentacled creatures and adorable robots and I think Japanese!  But there's a spacecraft that looks an awful lot like Howl's Moving Castle.  And there are mecha.

What I mean about the distance between Zita and the reader is this: in the first book, we see everything through Zita's eyes.  This time around, Zita's reputation precedes her.  We see posters of Zita before we see her, and the author gives us glimpses of scenes in which she doesn't appear.  Because we're not inside Zita's head all the time, there are also moments when she seems less noble than she does in the first book, like when she steals a random space craft to chase after her friends.  Also, when she saves the day at the end of the story, she seems driven more by a desire to establish her identity than to protect others from harm.  It's the slightly disreputable nature of both Zita and the motley crew she falls in with that really intrigue me about this series.

Needless to say, I'm looking forward to seeing what happens next in Zita's saga.  Since Legends ends in a cliffhanger, I'm sure there's more to come.  I wonder whether the series will continue in picaresque form or whether there's an over-arching storyline that hasn't really been introduced.  Is there a reason why the red button landed in Zita's backyard?  Are characters like Piper and Pizaccato looking out for her on purpose?  Are the police after her for more than the stealing of someone's ship?  I'm not saying I think Zita is some kind of "chosen one."  After all, the first book pokes fun at that kind of plot.  Plus Zita's too much of a space cowboy.  I mean girl.  But I'm kind of hoping for an epic battle of good and evil.

This book is sure to please fans of the first book as well as devotees of the Amulet series.  I also think that the uptick in action will make this a good recommendation for kids who like Missile Mouse and perhaps manga series like Neon Genesis Evangelion ... not that the kids are reading that these days.  I'm trying to think of robot manga that the kids are reading these days and I'm drawing a blank.  But kids still like robots, right?  I know they do.  In fact, Zita is now officially one of the many graphic novels that are making sci-fi cool at my urban elementary school library.  So, go robots!