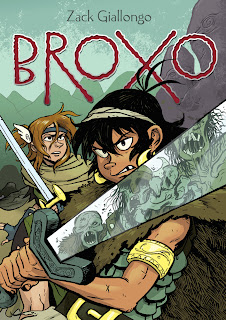 I don't often reread books, but Broxo is a title that I enjoyed very much the second time I read it.  It takes place at the top of an icy, barren mountain that reminded me of "The Wall" in The Game of Thrones ... especially when the zombies appeared.

A young barbarian/Viking-looking princess named Zora climbs to the top of the mountain, on a mission to find the Peryton clan.  But all she finds is a boy about her age named Broxo and a giant, shaggy dog with a single horn, like a unicorn.  His name is Migo.


Broxo's a bit of a feral child, who doesn't understand why Zora doesn't want to sleep next to him and swim naked in the same lake.  He steals her sword and supplies so she won't leave, but he's mostly sweet and tries to keep her safe.  However, the mountain's not a safe place.

When the pair clash with a group of zombies, Zora's leg is scratched and Broxo takes her to the only other human on the mountaintop, a witch named Ulith.  In return for healing Zora's leg, Ulith sends them on a dangerous mission to collect honey.

The art for the story is cinematic.  Each chapter opens with a landscape done in a stormy palette of gray, brown, and purplish-blue.  Flashbacks are tinted with a warm orange and Ulith's cave is washed in an underwatery blue-green that reminded me of Ursula's cave in Disney's The Little Mermaid.

Although the setting is vivid, the pacing of the story is fast and switches perspectives constantly.  It's like cut shot after cut shot.  For example, when Zora and Broxo first encounter each other, they almost chop each other with their swords.  As they sneak up on each other and then run from the zombie they've disturbed, one panel shows Zora's perspective and the next shows Broxo's, and it keeps switching back and forth from panel to panel until they form a truce.

I can't decide if this device is effective and just a little advanced for me (since I like graphic novels but don't read them all the time) or if it's disruptive to the narrative.  I found it hard to follow the first time.  I got to these panels that were slashed through with black stripes and I was like, what the?  And it wasn't until my second read-through that I realized I was seeing the action from the perspective of Zora, who is hiding inside a giant skeleton.  The black slashes are rib bones blocking part of her view. 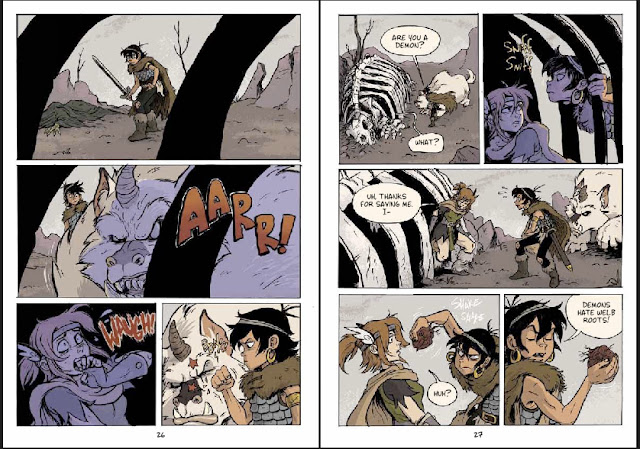 When I read this section the second time, I realized that the artist actually set the scene pretty well.  The giant skeleton appears more than once before Zora hides inside it, and when you mentally zoom out and look at the whole page, the ribs make a nice rounded arch around the action.  So it's possible I struggled with the narrative because I was tired or because I was reading this on my ipad.  But I think the fact that the artist doesn't stick with one perspective for more than a panel is also a factor.

Obviously, there's a story to why Broxo and Ulith are the only people living on the mountain, and that story is mostly revealed through dreams and flashbacks.  Here, again, I struggled to put the pieces together.  The flashbacks feature characters who haven't been introduced yet, but who in some cases look remarkably similar to Broxo and Zora.  This makes sense later, but when I was perusing the dream-sequences the first time around, I just wasn't sure who I was looking at.  It's very satisfying when it all comes together in a dark, bloody conclusion, but this is another reason why I enjoyed the story immensely the second time I read it.

Although this isn't as easy-breezy to read as some GN, I definitely recommend it, especially to Bone fans.  The isolated setting, scattered with skeletons and dead trees, is surprisingly varied in textures and lifeforms, and the characters' fluttering capes made me feel the cold along with them.  The characters themselves are tricky to figure out but sympathetic, and the resolution to the story is hard-won.  It's something of a coincidence that Zora appears at the same time as someone from Broxo's past contacts him.  But in fantasy, who's to say what's a coincidence and what's destiny?  Perhaps the parallels between Zora's and Ulith's stories are something of a catalyst for the final magical confrontation.

And you know what's completely awesome about this book?  So many powerful female characters.  Although it's called Broxo, it's the warrior women in Broxo's life that drive the story.  I even loved the way they were drawn, with muscular legs and wild hair.  This is definitely a title that defies categorization as a "girl" or "boy" book, even as it celebrates strong women, and I think it will find a wide audience, especially among Bone fans.  It's a great choice for teens, and, as long as you don't mind zombie-style violence, it's fine for younger readers, too.  (The swimming naked scene doesn't show anything but shoulders and it doesn't lead to anything besides Broxo brushing hair out of Zora's eyes.)

I have a feeling that there will be more stories about Broxo and Zora since there are a number of other clans around, and the story ends with the beginning of a new journey.  I'm definitely looking forward to more work from Zack Giallongo and have my fingers crossed that his next story will take place in the same world.

Broxo will be released October 2, 2012.  My review is based on an ebook from Netgalley.  There's also a preview on the Macmillan website.
Posted by xemilyx at 8:31 PM