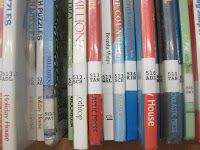 I recently read a post on the digital shift (via 100 Scope Notes) about a librarian who recataloged his library using a made-up system.  Interesting stuff, although I've already read similar posts on METIS or the lovely glades at the Darien Public Library.*  What really got me was the comments.  I cannot stop thinking about the comments!  I'd comment myself, but the post is a bit old and the author hasn't weighed in again, so I'm just going to rant here instead.


A few of the comments ask the author what he uses for call numbers, which is something I'd like to know myself.  But many of the comments take the author to task for being idiotic and vain.  These Dewey defenders seem to think that if they just explain the system, we'll all be like, "The gods of the library have revealed to me the truth: the system is perfect!"

Now, it's impossible to take a cataloging class and not be kind of impressed by the DDC, because it's so darn comprehensive.  You can shoe-horn just about any text into its numerical system.

But that's not the same as saying it's a natural fit for all libraries.  In fact, I don't think it's a good fit at all for children's libraries.  So, with respect to the brilliance of the original concept, here are my three reasons not to worship Dewey (if you're a children's librarian), plus a rebuttal to one of the aforementioned commenters' points.


That said, I don't hate Dewey.  I still use it in my library for parts of my collection.  However, I obviously don't use it for the same reasons as some of the commenters.  One person writes:


when one of my students go to another school, they will know how to find books at the new library… unless that idiot librarian has made up her own system of shelving. Then the student is only confused.

I don't want my students to memorize Dewey.  I want them to be able to use a call number to locate a physical book, because that's a useful skill.  But mostly I want them to look for patterns, make connections, and discover the logic of systems around them.  I'm pretty sure that if I succeed, then they'll be able to transfer those skills to lots of situations, including libraries with different organization systems.

I just hate this idea that we have to teach kids Dewey so they won't be lost in another library.  You know what I teach my students?  If you're lost in a library, ask a librarian.

I guess I just have to cross my fingers that the librarian they ask isn't one of the people who made a condescending comment on that post.