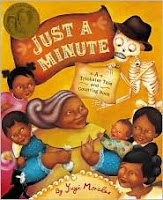 Unfortunately, I was not able to include one of my favorite Grandparent books on this list, Just a Minute, by Yuyi Morales.


The family engagement committee at my school decided to invite grandparents to visit classrooms on Valentines day, and the committee asked me to suggest some books for the grandparents to read aloud.  And I thought including a book in which death, personified as a skeleton, comes to whisk away Grandma might be a weird thing to hand an actual grandma on Valentines Day.
Of course, certain grandmas would love it.  But since I don't personally know all the Grandmas who will be coming .... you see my point.

Still, I'm very happy with this list.  It's marvelously multicultural without me even trying to make it so.  In grandparent books, the family is the story, rather than the backdrop.  So you won't often find generic, white bread families in these books--you'll more likely find complicated, blended, mismatched, lively, and even tragic families--families with unique identities and an actual sense of history.  Like in the real world.

Some of these books are also likely to appeal older elementary school students.  I rarely make my super-stylish fifth graders sit on the rug and listen to a story, at least partly because their pants seem to be either skin-tight or sagging, making rug-sitting problematic and uncomfortable.  See how I'm always concerned about their comfort?  But I think they can especially appreciate books like Grandfather's Journey, The Lotus Seed, and Grandpa Green, which seem grown up, because they actually tell the story of grown-ups.

Knuffle Bunny Free by Mo Willems (K-1) Trixie visits her Oma and Opa in Holland but forgets her beloved stuffed animal, Knuffle Bunny, on the plane! Will she be satisfied with the replacement her grandparents offer? This book is funniest if children are familiar with the Knuffle Bunny series.

The Napping House by Audrey Wood (K-1) In this cumulative tale, the narrator lists all the animals and people who are sleeping in the house, until … surprise! One more creature joins the pile in bed and wakes everyone up.

Grandfather and I by Helen Elizabeth Buckley (K-2) In a world where everyone rushes him, the child narrator of this story celebrates taking it slow with this grandfather.

Yoko’s Paper Cranes by Rosemary Wells (K-2) After moving to America, Japanese cat Yoko keeps in touch with her grandparents by mailing them paper cranes. Includes instructions for folding your own.

My Abuelita by Tony Johnston (K-3) As grandma goes through her morning ritual, children will try to guess what she does for a living. Hint: her job requires a booming voice and a crazy outfit!

The Wednesday Surprise by Eve Bunting (1-3) A girl and her grandmother plan a birthday surprise for her father. What are they working on every Wednesday?

Night Noises by Mem Fox (1-3) An older woman dozes on the couch, dreaming of important moments in her life (shown in sidebar illustrations). Her dog notices strange noises outside. It seems like a set-up for a scary story, but ends in a surprise family reunion. The

Hello-Goodbye Window by Norton Juster (1-3) The kitchen window of her Nanna and Poppa’s house seems magical to a little girl who peeks in and out of it. Caldecott-winning illustrations make this story of “what I did at my grandparents’ house” special.

A Couple of Boys have the Best Week Ever by Marla Frazee (2-3) A grandfather repeatedly tries to take two boys to an Antarctica museum exhibit, but the boys prefer video games and junk food feasts. Just when you think they’re going to completely miss this wonderful learning opportunity, the boys turn the tables on grandpa. Hilarious!

Jingle Dancer by Cynthia Leitich Smith (2-4) A girl collects tin jingles from different female family members so she will have enough to do the traditional dance her grandma taught her at powwow. Repetition lends an oral storytelling quality, but the contemporary setting grounds this Native American tale in the present.

Grandpa Green by Lane Smith (2-4) The story of this gardening grandfather’s life is told in topiary! The book ends with a giant fold-out illustration showing the garden the old man has created to commemorate important parts of his life.

Grandparents’ Song by Sheila Hamanaka (2-5) In this song-like, rhyming story, a girl traces her multicultural family history from her grandparents down to her, explaining where she got her dark hair, blue eyes, and brown skin.

The Lotus Seed by Sherry Garland (4-5) Fleeing Vietnam, a young woman takes only one memento: a lotus seed. Years later, her granddaughter explains what happened to the seed and why it meant so much to her grandmother.

When Lightning Comes in a Jar by Patricia Polacco (3-5) Grandma promises this family reunion will be special: she will teach the grandchildren how to catch lightning in a jar! But that’s not the only special thing about this reunion—every moment is memorable when described in such loving detail.

Grandfather’s Journey by Allen Say (3-5) This spare, moving story of immigration and homecoming is Say’s masterwork. He quietly tells the true story of his grandfather’s travels between Japan and the United States and the tantalizing feeling of being attracted to two different places.

Grandma’s Records by Eric Velasquez (3-5) Grandma teaches her grandson a love of Puerto Rican music, first by sharing her records and then by taking him to a once-in-a-lifetime concert. I really love the last illustration of this book, which shows the grandson grown up, in his hip studio, still rocking out to grandma’s music.

For additional titles, see my Goodreads Bookshelf.
Posted by xemilyx at 4:24 PM