The Green Book by Jill Paton Walsh is a slim sci-fi novel that looks like it might be a good beginning chapter book.  I read it as a child and the outline of the plot still stands out in my memory: a father and his three children choose the bare minimum of possessions to take with them to a new planet, but when they get there, nothing will grow, and there is no way to leave or get help.


Sounds simple and gut-wrenching, right?  But the lyrical descriptions and complicated sentence structure make this a challenging read--they also cast some doubt on the surprise at the end of the story--but I'll get to that post-spoiler alert.

Here's an example of the kind of paragraph that makes this book both beautiful and demanding for a child reader.  When the community arrives on their new planet (Earth is no longer habitable), they are struck by how very still and shiny everything is.  The grass is actually brittle and sharp, like glass, and in the distance, there's a lake and a mountain:


And all the time we walked toward the lake, it did not move, or ruffle, even enough to shake the curtains of reflected mountain and reflected sky that hung in it.  And though the air smelled good and sweet to breathe, it was windless, and as still as the air in a deep cave underground.  Only the little rivulet that followed us across to the lake from the crag valley where the ship had lodged moved; it chuckled gently from stone to stone, and sparkled as brightly as the glass leaves and grass.

This is definitely a book that exercises your brain, not only with the prose but with the science problem-solving.  When they arrive on the new planet, the community has to figure out the best way to build houses, create light after dark, and grow food.  They have to test new materials they have never encountered before and divide the labor fairly.  They accomplish most of these goals, except growing food.  The tension builds as their livestock slowly die, the rations from the ship run out, and the food they plant transforms into something inedible.

I was riveted by this book, but I realized that wasn't because I cared about the characters.  In fact, the characters seemed sort of removed.  I never got inside their heads.  Rather, I was riveted because I felt like I was there.  I felt like I was one of the characters.  I'm not sure how the author did this, but it's supremely effective.  Maybe it is just the fact that each chapter has a purpose and the narrative never wavers or wanders.  It is completely focused on how the characters will solve the problem of survival, and the result is a claustrophobic setting that seems very real.

Now, about the ending.  Consider this your SPOILER ALERT.  The Green Book is told in third person, but on the last page, it is revealed that the whole story was written down by the 10-year-old girl, Pattie, who is sort of the main character.  It's a satisfying reveal because Pattie's blank notebook is mentioned in the first chapter, so although I never made the connection as a young reader, it's possible to guess what's going on.  However, the reveal isn't completely believable, because the prose doesn't sound at all like something a 10-year-old would write.  That didn't bother me as a young reader, but as an adult, I feel like the author could have adapted her style. END SPOILER.

Of course, my purpose in reading this and other sci-fi books is to find ones that would be good for my elementary school library collection.  I actually already have this book on my shelves, but I have a version with this cover: 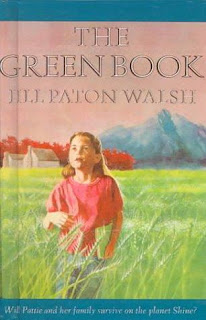 So I'm considering updating to this cover, because I think it will appeal more to the precocious older readers who would be able to understand the descriptive passages.  (Also, I'm intrigued that it includes the original illustrations.) 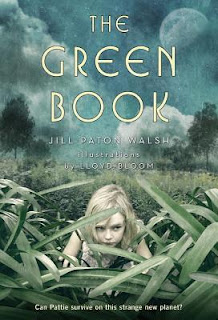 However, I think this novel would really work best as a read-aloud, and what a wonderful read-aloud it would be: short enough that you could finish it in a week if you read a chapter a day, lots of ways to relate it to the science curriculum, and lots of beautiful language with which to fill kids' ears and minds.
Posted by xemilyx at 8:03 PM