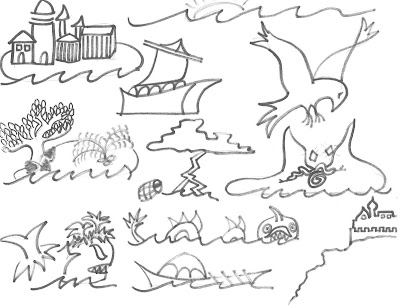 Although I learned about developmental levels in school, what I really needed to know was the exact age when a child can use scissors without cutting herself. This summer, I feel like I finally got a handle on the different age ranges for which I should be offering programming. There are some natural divisions in kids' abilities and interests, and by getting tough about the age ranges for my programs, I figured out what some of those divisions are.

For example, the age when kids can string beads and noodles on a piece of yarn that is taped at one end: 7. The age at which children become embarrassed to do finger rhymes and songs: 9. And the age when they can operate the bathroom key and therefore do not need parents in the vicinity to accompany them: 10.

Obviously, some of these only apply to my library, but this is invaluable data for me. Part of the reason I've been so focused on ages and skill levels is that I've been trying to do more effective programming for my older kids. And by older, I mean older than 5, so actually, I'm talking about everything besides my preschool programming. One of my goals has been to introduce longer, more complex picture books, and I would like to announce my first successful approach to this end: story maps!

The one above is for the book Sindbad : from the tales of The thousand and one nights, retold and illustrated by Ludmila Zeman. We've been doing a lot of stories about sea voyages this summer, and I wanted to include this one, because I think the 1,001 nights is a classic and kids these days don't know their classics. Also, the illustrations are riveting--almost baroque in their detail. (Although the cover is not nearly as neon as that pic would lead you to believe.) But the text is longish, and the vocabulary is challenging, so I wasn't sure the tale alone would hold the kids' attention. Hence the story map! 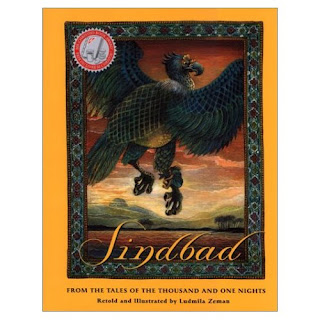 Basically, I just drew a number of important objects from the story and had the kids color in the objects when they were mentioned. Worked like a charm! It was a different kind of listening than that rapt silence kind of listening, but they were definitely paying attention and they did a good job of telling the story back to me with the images as prompts. And the fact that it was difficult to identify some of the objects, since my drawing leaves something to be desired, only added to the puzzle-like challenge. This is definitely a repeater--and another step toward my beginning reader story time.
Posted by xemilyx at 6:29 AM