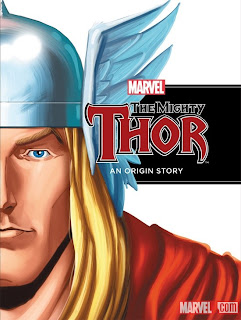 I picked up three of the Marvel Origin Story picture books at Borders for about $4.50 each. I figured they'd fall into the category of "books with high kid appeal and questionable literary merit." That said, don't ask me why Marvel picture books bother me less than Disney books. I never buy Disney books.

So I read them (The Mighty Thor, The Amazing Spider-Man, and The Uncanny X-Men) and I thought they were solid choices. They're written like fables--all narrative and no dialog. I did feel like there was a huge missed opportunity there. I mean, these are stories from comic books. Why not add some word bubbles to the art? The readers would understand Spider-Man's character better if they got some of his witty banter.

Without the dialog, the characters seem very serious. There's a surprising lack of humor in the stories. But that's not exactly a complaint. You do get a sense of the epic-ness of these comics, which works particularly well with Thor's origin story.

The main thing Marvel got right was the amount of text on each page. Unless you're Patricia Polacco, you can't get away with too many words on the page anymore. At least, not if you want to appeal to 7-year-olds. These are the right length for read-alouds, even if they are 48 pages rather than 32 (wow, I just counted and that surprised me), except for maybe the X-men story. I feel like they could have cut that one off earlier. They tried to cram a lot in.

The way that these work well in a school is that they give you so many opportunities to talk about character traits. Again, the Peter Parker and Thor stories are all about how those characters developed into decent people who took responsibility for their actions, and for their community. Obviously, the Thor story also gives you an opportunity to talk about mythology. In case it isn't obvious, the X-men story is the weak link. I don't really know what you'd do with that. Science? Mutations? Tolerance? The story skims too much. It doesn't give you a lot to work with. 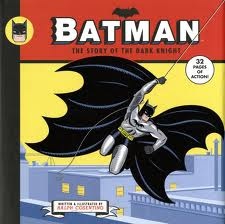 There's also a Captain America Origin Story, but I didn't find that at the Borders where I was shopping. I bought these partly because I already have Ralph Cosentino's picture books about Batman, Superman, and Wonderwoman. I love them, because the art has this really retro vibe. They capture the feeling I imagine 1940s kids having when they read the original Amazing Stories, etc. These Marvel Origin Stories are much better, in my opinion, than the easy readers Capstone is putting out there (although I may buy those, too).

And basically, I'm a fan of introducing kids to this American mythology. People try to say Paul Bunyan and Johnny Appleseed are our mythology, but I believe it's comic books.