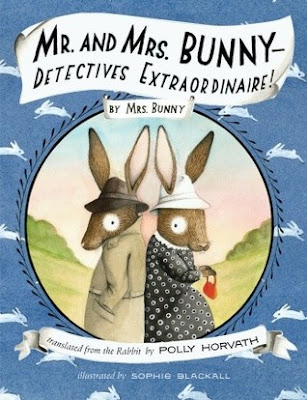 This was my first Polly Horvath book, and that makes me feel like I might not be qualified to review it.  I've met some Polly Horvath fans, and they get a mushy look on their faces when they talk about her.  I think there might be some Horvath tropes that I didn't recognize and therefore didn't fully appreciate.  So I'm going to dive in, but here's the thing: I didn't immediately like the book.  But here's the other thing: The bunnies ultimately won me over.

Mr. and Mrs. Bunny--Detectives Extraordinaire! begins with Madeline, a girl living in a remote part of Canada with her ditzy, hippie parents.  These are not endearingly eccentric hippie parents; these are annoyingly selfish ones who refuse to understand why their daughter wants to go to her 6th grade graduation, where none other than Prince Charles is scheduled to hand out the awards.  Thus responsible, resourceful Madeline waitresses at a local restaurant until she has enough money to buy the white shoes required for graduation herself.  She is walking home at night with the money in her pocket when a car speeds past her, almost knocking her off the road.  The car appears to be driven by foxes.  When she arrives home, there is a note stuck to the fridge: indeed, foxes have kidnapped her parents.

I really shouldn't explain any further, because the story is delightfully nonsensical.  Suffice it to say that Madeline hooks up with two bunnies who have recently moved to the city and bought fedoras with the desire of becoming detectives.  They take the case of her parents' kidnap by foxes, but they are often distracted by meetings of the local hat club and the need for home baked snacks.

One of the reasons I started to lose patience with the book is that all the adult characters, from Madeline's parents to the bunnies, are similarly dense.  The conversations Madeline has with these characters are funny, but they are all funny in the same way: the adults can't seem to stay on topic.  For example, when Madeline explains the situation to her uncle:


"Madeline, dear," he said when she burst in.  "What are you doing here?  Or am I imagining you?  My fever keeps spiking.  Still, why imagine you?  Why not imagine a piece of pie instead?" ...
Madeline ignored this departure into pie and gave him an organized and coherent account of events before handing him the note.
"Extraordinary," he murmured.  Then he sighed.  "Still I do think you'd make a better piece of pie ... You don't suppose you could make an effort to be pie?"

Madeline doesn't meet the bunnies until one third of the way through the book, and by the time she has the same kind of loopy conversation with them (after they make her hop over 37 hills to get to their hutch for lunch), I was as frustrated as Madeline.  However, I stuck with the book because by then the bunnies had grown on me.

Mr. and Mrs Bunny made me think of grandparents with cell phones.  The two of them have lots of enthusiasm, just enough knowledge to be dangerous, and no shame.  Mr. Bunny wears platform disco shoes so he can reach the pedals of his smart car.  Mrs. Bunny knits fashionable items out of used dental floss.  With their old fashioned appreciation of school graduations and hat clubs, and their sincere desire to reassure Madeline (even when they have no idea what they are talking about), the bunnies are a foil for Madeline's parents.  They're also hilarious in that old-married-couple-on-a-sitcom way, where they're always gently undermining each other and paying each other back for their jabs and jokes, but ultimately going to bat for each other.  I particularly liked when Mr. Bunny cried, "Mrs. Bunny, you have more enthusiasm than brains!" while following her into the fray.

Of course, the important question is, will kids love it?  I think they will, and I think the repetition will soothe rather than frustrate them.  However, like me, I think they will hanker for a little more villainous action.  The foxes are great bad guys, but they only make two appearances, and they seem lacking in commitment to their evil plan.  There are also a number of plot points that seem like they are going to be weaved into the stunning conclusion, such as a scientific article on explosives that Mr. Bunny is reading, which turn out to be irrelevant.  I wonder if these red herring plot points are signature Horvath elements.  I feel a bit as though the joke's on me as the reader for trying to make sense of a nonsensical book.

In conclusion, I think I should have started with a different Horvath book, because I definitely understand her charm after reading this one, but I feel vaguely disappointed by the way it ended.  Perhaps that is partly the disappointment of knowing I will not be having any more kooky conversations with Mr. and Mrs. Bunny.  Perhaps it is also the disappointment of knowing that Madeline is going to go back to living with her helpless parents rather than her new animal friends.  (In the flurry of events at the end of the book, she barely has time to say good-bye, which I think hurt my feelings as well as Mr. Bunny's!)  Perhaps it's just the disappointment of being done with a wonderful book.  It's the same disappointment you feel when you're waving out a car window to someone you love.  And if a book can make you feel that way .... well, I think I might have a mushy look on my face after all.

Ah, but I would be remiss if I did not mention the occasional black-and-white illustrations.  I adore Sophie Blackall, and her tendency to decorate her characters' clothing with playful patterns is put to good use here.  The animals' faces are toothy and not too cute, and the picture in which Madeline gets stuck in the doorway to the bunnies' house evokes just the right amount of Alice in Wonderland.  There are a few action shots where the perspective seems to be a bit wonky, which is weird since the running scenes in Big Red Lollipop were some of the most masterful.  However, it could be the weirdness of seeing bunnies and people running around together.  They are very different sizes, you see.  But apparently, the bunnies are large enough to drive smart cars as long as they have platform shoes.  Surely, this is easier to imagine than to draw.

I do think the last illustration is perfect: Madeline is on stage talking to Prince Charles, and at the foot of the stage are two rows of the backs of people's heads, and at the very back are the silhouettes of two bunny heads.  I  missed them the first time I looked, which perfectly illustrates what Prince Charles says to Madeline on the stage: "I've often heard animals speak.  Plants, too.  It's all a matter of noticing, isn't it?  The richness of our lives depends on what we are willing to notice and what we are willing to believe."
Posted by xemilyx at 9:14 AM