Review: The Wicked and the Just by J. Anderson Coates 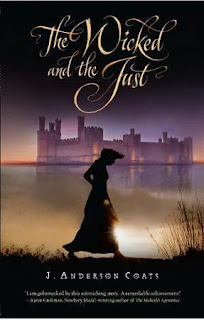 I have a special place in my heart for stories of rebellion against the English crown.  Maybe it's my Irish blood.  Maybe it's also the fact that my father read Robin Hood, The Quiet Man, and The Scottish Chiefs* out loud to me when I was 10.

I'd love to write about the odd and profound effect these books had on me, but this is supposed to be a review of The Wicked and the Just.  So just note that I am predisposed to adore books set in the medieval era and focusing on rebellions against England.


In addition to that, this book has a bratty narrator.  I love bratty narrators.  I love Mary Lennox and Harriet the Spy and Frankie Landau Banks and now I love Cecily d'Edgeley, too.

It's established on page one that Cecily's a brat.  When her father tells her they're moving to Wales, she declares, "Tonight at supper, over capon and relish, my father ruined by life ... I will never speak to him again.  Unless he buys me a new pelisson for the journey."

In England, Cecily is bratty but harmless.  In Wales, she's dangerous.  The reason her father moves there is because he has lost both his wife and the manor house where he was lord.  In Wales, he can get property and position on the cheap, as long as he agrees to help keep the native population in submission.  Cecily is more than happy to do her part keeping the native population in submission, too, and it takes a long time for her to realize how much damage she can really do.  The English nobility, including her father, are abusing their power and driving the Welsh into the dirt.

Cecily's story is interspersed with chapters told from the perspective of Gwenhwyfar, a Welsh woman of about the same age who works in Cecily's house.  Gwenhwyfar's chapters are short reports of grueling work and tragic home life.  She tells the reader all the things Cecily doesn't know--the murder and rape and starvation the Welsh are subject to.

Having read so many romantic adventure stories about rebellions against the English crown, I was anxious for Cecily to befriend Gwenhwyfar, make out with a Welsh boy, and stand up to some kind of powerful English person--a Burgess or Burger or whatever.  But that was not to be.  Cecily and Gwenhwyfar are at war for most of the book, and it's not a catty, hair-pulling war.  It's a war that almost kills Gwenhwyfar.

Thus I read the book in one night.

I desperately wanted Cecily to see the error of her ways, and I couldn't tell if she was ever going to.  I also knew that, with tensions rising between the English and the Welsh, either girl could end up in true danger.  Further, I couldn't see any way for the author to bring the story to a satisfying conclusion, since it's a historical fact that English never gave the Welsh their freedom.

I won't give away the ending, but I will say that in order to do this, the author invents (or perhaps recreates) a new kind of rebel: the kind who wants to use England's own laws to defend his people.  He doesn't want to get rid of English rule--he wants the rules to be applied fairly.  To that end, he seeks power and position within the English system rather than trying to overthrow it ... unless temporarily overthrowing it is a necessary intermediary step.

There's much to discuss here: justice vs. vengeance, how people in the middle of the pecking order shore up their own position by mistreating those "below" them, how an oppressive system strips everyone of their humanity.  Interestingly, this book is not about overthrowing the system, but about reforming the people who administer the system.  Rarely do I hear a case made for this in YA books.  With the current madness for dystopia, it seems to be all about overthrowing the system rather than changing the hearts of the people in power.  I loved this book for looking at the evolution of an oppressor and making you hope for her transformation rather than her demise.

Of course I wouldn't care a jot about these issues if the book wasn't written so well.  I absolutely flew through it.  Like many a medieval tale**, it's told in short "book of days" entries.  Although every chapter isn't dated, the book is divided into large sections with titles like "1293: Assumptiontide to Saint John's Eve."  There's a judicious use of words like kirtles and braziers and aves, which shouldn't trip up young readers since the sentences are short and to-the-point.  Gwenhyfar's sentences are often just verbs and objects: "Know what's coming.  Not afraid.  Keep my eyes down, though.  No need to make it worse."  And of course, the crowing achievement is the characterization.

I'm not sure how many teen readers will pick this book up off the shelves, since historical fiction isn't exactly "on trend" this season.  But I think it will strike a chord with those invisible regular library users--the girls who are so obviously readers that we may overlook them--the ones with the Hermoine hair and haunted looks who remind me of myself as a teen.  It's an obvious pick for teens who grew up on Karen Cushman and Shannon Hale and will someday read Hilary Mantel and Shannon Kay Penman.

**See Catherine Called Birdy and The Ramsay Scallop.
Posted by xemilyx at 11:41 AM