Review: We've Got a Job by Cynthia Levinson 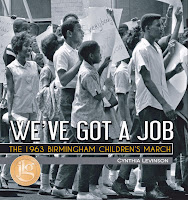 I'd like to echo what Levinson writes in the afterward to her book: "How could I not have known?" I knew a little about the role young people played in the Civil Rights movement before reading this book, but I never knew that children played a pivotal role in reviving the Movement at a time when it was dying out.


This is partly because history seems like a done deal.  We now know that of course the Civil Rights Movement prevailed.  Of course Dr. King is a good man and a hero.  Of course the protestors' demands were morally right.  We know how things turned out so questions like, "Is it right for adults to allow children to protest?" might not even occur to us.

But one thing this book makes clear is that there was no such consensus in 1963. Levinson shows how in 1963, Dr. King had lost credibility.  He and other civil rights leaders were widely described as out-of-towners who stirred up trouble and left local people to pay the price.  When these leaders tried to get some protests started in Birmingham, the turnout was embarrassing.

And by the time the author gets to describing how people reacted when one of the leaders started encouraging children to protest and go to jail--well, you really get it.  It sounds pretty crazy.

Another things Levinson does well is reveal the divisions within the leadership of the Civil Rights movement.  In her story, we hear them arguing with each other, and with middle class Black people, some of whom did not support confrontational action.  We hear them chastise each other, change each other's plans, act without one another's permission--and, of course, we hear them courageously challenging Black and White people to do the right thing.

Levinson also has an interesting chapter in which she explores what white people really thought at the time.  It's not so easy to determine.  Very racist people were very vocal, but were the less vocal people sympathetic? oblivious? disgusted?  How can we know?

There's so much that's excellent about this book.  My only criticism is that the author mostly tells the story from an adult perspective.  She introduces four young people who were involved in the protests and uses them to illustrate four different experiences.  But rather than telling most of the story from their perspective, it's more like she just checks in with them from time to time.  The story is about the leaders: Dr. King, Reverend Fred Shuttlesworth, and James Bevel.

There's nothing wrong with the way Levinson approaches the story.  She's clear and organized.  But since this is a book for young people in which she makes the case that young people saved the Civil Rights movement, I think she could have structured the telling so that we stayed with each young person longer, allowing each one a narrative arc.  I felt like I didn't really get to experience the whole thing with them.

Could this book be a Newbery contender?  I look forward to discussing it with my mock group, because the truth is I rarely read nonfiction.  I had zero trouble reading We've Got a Job.  It was riveting.  But I find it difficult to compare fiction and nonfiction.  Is this book better than the novels I've read so far?

I thought the characters and plot of this story could have been delineated in a way that would appeal more to young readers.  However, the topic alone makes this a significant contribution to children's literature.  And there's no questioning the clarity, accuracy, and organization of the information.  For those reasons, this book is definitely on my short list.
Posted by xemilyx at 8:15 PM