A Tangle of Knots by Lisa Graff had me thinking about baked goods and children's books.  Baked goods have always represented family, tradition, sweetness, and warmth, so it's no surprise that they often feature in books for children.


Baking is also a basically scientific process that appears magical--you put a soupy, sticky batter in the oven and you pull out a delicious cake.  So slipping some magic into the baked goods is a good way to get kids to accept the existence of magic in an otherwise realistic work of fiction. 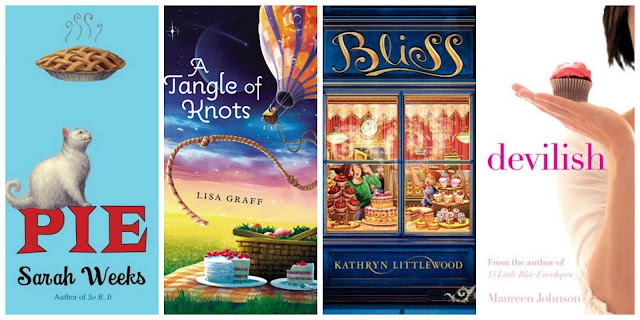 The most popular baked good to appear on children's books is undoubtedly the cupcake. I first noticed the cupcake phenomenon at the last Scholastic book fair I held at my school.  There's a surprising number of series based on cupcakes: 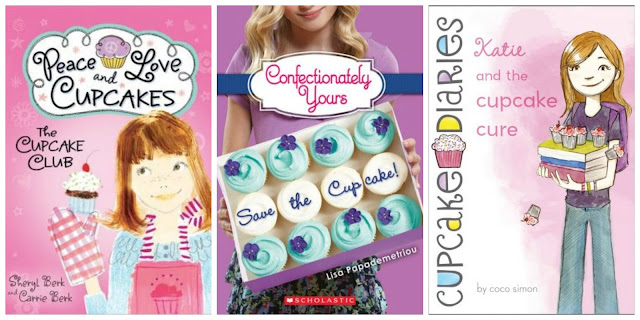 I'm assuming that here cupcakes represent a certain kind of cute femininity that middle school girls are going for.  But cupcakes can also represent entrepreneurial spirit and political power. 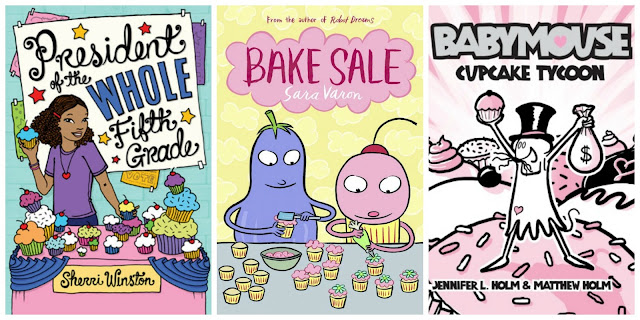 What most of these cupcake covers have in common is that they seem to be offering you a bite.  What better way to get a kid to pick a book up off the shelf than to use an image that seems to be reaching out to you, holding something delicious? 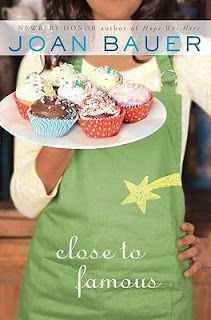 One of my favorite cupcake books is Almost Famous by Joan Bauer.  It's about Foster McFee, a girl who dreams of hosting her own baking show when she grows up.  When her mother runs away to a small town to escape her Elvis-impersonator ex-boyfriend, Foster starts baking cupcakes for a local restaurant as well as cleaning the house of a disgraced movie star.  The book has lots of small-town flavor, plus recipes!  The plot sort of careens all over the place, but it's still a super likeable story.

I also like the way Foster is depicted on the cover (although I wish her head wasn't cut off).  The way she's standing projects just the right amount of self-confidence, the shooting star on her apron hints at the theme, and her skin tone is just right for her biracial background. 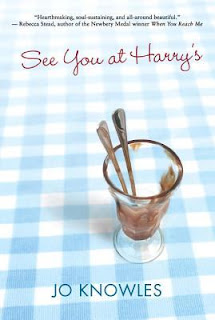 See You at Harry's is about a family-run ice cream parlor--but unlike so many fictional bakeries and candy shops, this ice cream parlor isn't a wish-fulfillment factory.  The kids in the family hate being associated with it.

I didn't think about the cover of See You at Harry's much before I read it, but now that I've finished it, the cover seems sort of genius.  In an abstract way, it prepares you for the wistfulness and melancholy you find inside the book.  Empty ice cream bowl = the anti-cupcake.

Do you know of any other delicious covers?
Posted by xemilyx at 1:32 PM