Review: Half World by Hiromi Goto 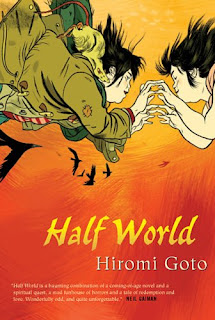 There are zillions of books with vaguely medieval fantasy settings, but I love a fantasy world with rough edges and a very specific purpose. Half World is just such a place. It's one of three realms, which were once connected. People passed from the realm of the living to the realm of half-life to the realm of the spirit life and then back to living in a constant cycle.

But somehow the realms were severed, so that living people were reincarnated without passing through the other worlds. Anyone stuck in Half World had to reenact their greatest traumas over and over again without every getting over them. And no one's heard from the Spirit Realm.

Enter a melancholy girl named Melanie Tamaki (Canadian-Chinese, I think?), whose mother is a vague, lifeless woman who lives like a fugitive. One day, Melanie comes home to find the phone lines cut and her mother missing. While she's wondering what to do, she gets an impossible phone call from a man with an icky sticky voice who commands her to go to a highway overpass and look for an emergency door. I bet you can guess what's on the other side.

I loved the ideas behind this book, and I loved the illustrations by Jillian Tamaki: the bridge of crows, the disintegrating magic eight ball. With references to Escher and Bosch, Half World really lent itself to artwork, much the way The Phantom Tollbooth, Un Lun Dun, and Coraline did.

But I also feel like there was a missed opportunity here. Once Melanie crossed over into Half World, she spent all of her time at a seedy hotel where her nemesis was having a party. I wanted her to meet some of the tortured creatures of half world and hear their stories! I wanted her to have daring escapes and Herculean tasks! I wanted a picaresque journey through a fully developed world! OK, I wanted a lot. But still, I feel like confining our character to a hotel limited the possibilities too quickly.

The other problem was that the explanations were not always clear. For example, Melanie received an amulet that sometimes turned into a living rat and helped her. This is the amulet maker's explanation for how this works:

I wanted to see if I could leave a little Spirit inside stone. Because stone is inert. It did not breach the laws of the cycles. Jade Rat the animal was very old. I extended her mortal life but even I could not more than double her life span. I turned her into stone from which the amulet was carved. And when my death came upon me, sudden and terrible, I left a little of my Spirit inside the properties of stone (99).

So she extended the animal's life but turned the animal into stone and then put some of her life in the stone, so the stone could turn into the animal at certain times?

Anyway, this is still a fantasy novel I would recommend to many readers, especially those who like to read gruesome stories and then tell me: "This book is messed up! Listen to this!" I would say that the book is creepy enough that it's a teen pick, as opposed to children's (people reenacting the moment of their worst trauma over and over again, monstrous creatures with gaping holes in their faces or bodies made of glue, you get the picture). And I think I would buy anything with Jillian Tamaki's artwork on the cover.
Posted by xemilyx at 8:23 AM