I'm imagining saying that to people in 20 years. EA stands for Emerging Adult, because according to a recent NYT article, what used to be "your 20s" is now a discrete neurological stage in the development of human life! Check it out:

"JEFFREY JENSEN ARNETT, a psychology professor at Clark University in Worcester, Mass., is leading the movement to view the 20s as a distinct life stage, which he calls “emerging adulthood.” He says what is happening now is analogous to what happened a century ago, when social and economic changes helped create adolescence — a stage we take for granted but one that had to be recognized by psychologists, accepted by society and accommodated by institutions that served the young."

If "Emerging Adulthood" is a stage with its own psychological profile, it follows that it must have it's own literature. At least, I think. And I can even think of a few examples: 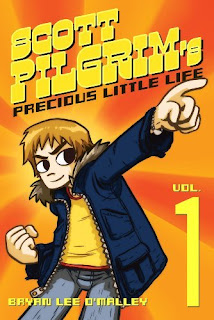 The most obvious example of literature for disaffected 20-somethings (or, you know, "Emerging Adults") is probably Scott Pilgrim. Isn't the first line something about how he's dating a high schooler? Or is that just in the movie? Anyway, that's one of many graphic novels that focus on the culture of people who are delaying the traditional progress to adulthood (careers, marriage, children). Personally, I adore the work of Adrian Tomine, particularly Shortcomings, which looks at one guy's inability to have a functional, adult relationship with his Asian girlfriend, because he's fascinated by white women and what they represent.

There are also a few series that follow characters through their adolescence into some semblance of adulthood. Like the Alice books, which follow a character from childhood to her teens, these books are difficult to categorize. Do I put the first few in the teen section and the last one in adult? Obviously, I never do that, so I'm not actually sure why I posed the question. But. Theoretically. Anyway, I'm thinking of Megan McCafferty's series, which begins with Sloppy Firsts, and Ellen Emerson White's series about the daughter of a woman who runs for President. 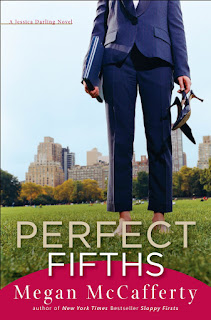 In Sloppy Firsts, Jessica Darling feels attracted to a boy who might have contributed to her brother's deadly drug habit and writes long letters about her doubts to her best friend who moved away. I was completely attracted to the bad boy romance, especially when the novel ended without resolving Jessica's feelings for the boy. And I kept right on reading til I finished Perfect Fifths, in which Jessica is a 25-year-old, well-traveled professional who misses a plane to a friend's wedding and has an unexpected 24 hours in which to reflect on her past relationship choices.

I haven't read every book in Ellen Emerson White's series, because I got a review copy of Long May She Reign at a conference and just started there. Long May She Reign focuses on Meg Powers' first year of college, which is complicated by the fact that A) her mother is the President of the United States, and B) last fall, Megan was kidnapped by terrorists. It's a fascinating profile of a survivor. I've always meant to go back and read the other books in the series, particularly the one in which she's kidnapped, and I hope that White writes another one about Meg's 20s.

I'm sure there are many more books for post-YA readers. Can you imagine a section of them in your library some day?
Posted by xemilyx at 9:24 AM