I finally read some of that Tiger Mother book 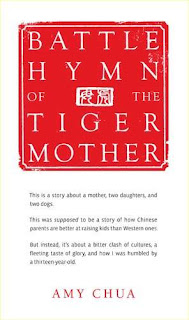 There are excerpts in lots of places, including WSJ, where I read it. What I find most interesting are other people's reactions, especially an African-American perspective on NPR.

I'm trying to figure out if any of my students have tiger mothers, or if there's any part of being a tiger mother I could (or should) apply in the classroom/library. Obviously not the part where Amy Chau calls her kids garbage! Nor can I spend hours one-on-one with a child, badgering her into achieving perfection. But maybe the idea of never giving up?

I let my students slide out of finishing work pretty frequently. I give them a mediocre grade because their work is incomplete, but then I move on, because I don't want to keep the class waiting. Would it be better to make that child keep working on step one until she gets it right? It's hard to imagine making one child sit at her desk working on the same thing until it was perfect while other students raced ahead. But I want to be brave enough to do whatever it takes to really teach kids. Not just coach my kids into doing enough work to get them an S on their report card.
Posted by xemilyx at 10:39 AM