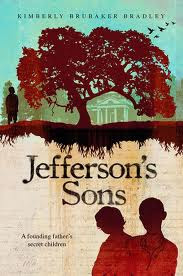 I really wish I had liked Jefferson's Sons by Kimberly Brubaker-Bradley. It focuses on such an intriguing bit of history, and yet I feel like some of the untold stories were even more interesting than the told ones.

The novel follows three boys who live in slavery at Monticello. Two of them are the sons of Thomas Jefferson by Sally Hemmings, and from the moment they are born, Sally is planning their future as free men.

The boys' parentage is an open secret, and one thing that struck me was how nice everyone is about it. None of the other slaves seem to mind that Sally Hemmings' children will be set free when the turn 18 while everyone else is property forever. I mean, they mind, but it doesn't create any distance between them and the Hemmings. In addition to being nicey-nice, the adults are very into explaining things to the kids, and other bloggers have been bothered by these modern-sounding conversations.

I didn't mind the conversations so much, but I was disappointed by the novel. Here's why: not much happens. There's the obligatory whipping scene, the boys get violin lessons, a slave gets sold to another family, and lots of fancy dinners get served. Plenty of chapters have this feeling of impending doom, but they tend to conclude suddenly without anything particularly bad happening. If I were trying to convince a child to read this book, I wouldn't know what to tell them.

I'm interested in books that complicate our mental picture of slavery. I think of the images that have stayed with me since I learned about slavery in school--the diagram of a ship with slaves packed in like sardines, that famous photograph of the scars on a former slave's back--they tell important stories. But I'm almost used to those stories. And there are so many other stories. Hearing a new one reminds me that, yes, slavery was really that bad. That crazy. That complicated. Is it important to be reminded? It feels important.

So this novel tells one of those "other" stories: the story of kids who walked the line between black and white. But like I said, not much happens. I want to know more about Sally Hemmings' life in Paris, where she was paid like a servant instead of treated like a slave. I want to know more about the experiences of Sally Hemmings' children when they leave the plantation and learn to "be white."

But it occurs to me that those would be YA novels. It's damn hard to write a children's book about slavery. For one thing, you have to be delicate about the sex and violence of slavery, which feels like cheating. For another thing, childhood is a narrow window in which to tell a sweeping story. This is one area in which Brubaker-Bradley comes up with a clever solution: she cycles through three different protagonists. As one boy reaches his teen years, she switches perspectives, telling the next part of the story from a younger boy's perspective.

So I applaud Brubaker-Bradley for telling the story that so intrigued her and I hope it inspires others. I'm glad the book is getting good reviews in Horn Book and that it's championed by Elizabeth Bird. But I can't say I'll be recommending it to a lot of kids at my library.
Posted by xemilyx at 6:41 PM