Review: Everybody Sees the Ants by A. S. King 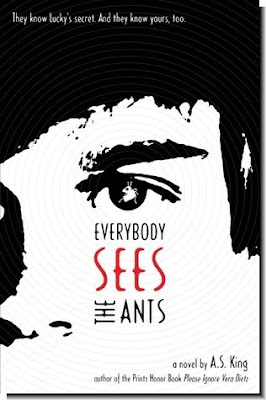 Everyone treats Lucky Linderman like he's crazy since he proposed this for a social studies project: poll the students in the freshman class to see how they would kill themselves. But Lucky's not suicidal. He's just sick of being bullied by Nader McMillan, whose been torturing him since they were seven. And Lucky's not crazy, either. He just dreams about rescuing his grandfather from a POW camp in Vietnam. And then wakes up with bits of the jungle in his bed.

Lucky explains all of this while he's on an impromptu vacation to his Uncle's house in Arizona. His mom takes him there after Nader attacks him at the town pool and Lucky's father, as usual, shrugs it off.

The pace of the book is unusual. It's never boring but I didn't have a strong sense of where it was going. In fact, that's making it hard to write a summary, because I don't know where to stop. There are so many important things to talk about, but many of them aren't revealed until the novel is pretty well developed. This is compounded by the fact that Lucky doesn't exactly tell the story in order. I also couldn't tell which characters were going to be the good guys and the bad guys (with the exception of Nader who was a total villain). But together, this made it all more real.

Another thing I liked about the book is that the author never cops out. There's no it-was-all-a-dream and no bullies-are-just-misunderstood. The bad stuff is bad. And it's real. Including the things that happen in Lucky's dreams. They may not be real in the strictest sense of the word, but they're not just a delusion either. Without ever explaining it, the author shows that Lucky is truly connecting with his grandfather--who he's never met--in his dreaming life. I liked this so much, I think, partly because I was so burnt by Going Bovine, which didn't seem at all real at the end.

And speaking of real, the characters in this book are so real, that I'm still trying to decide if I like one of them. Maybe that's not so weird, but I can't think of this ever having happened before. Usually I know how I feel about characters, and usually I think I know how the author wants me to feel about a character. But with Ginny, I'm still veeeeeeeery conflicted. And before I explain further, I just have to point out that Ginny doesn't even talk to Lucky until page 131. How often is a significant character introduced halfway through the book? Cool.

Anyway, Ginny is a slightly older, fantastically attractive hair model Lucky meets in Arizona. Her parents treat her like a paycheck, so she sneaks out after dark to practice the Vagina Monologues with her butch friends. Lucky thinks she's fantastic, but I didn't dig the way she dragged him around like a lovesick puppy. I thought she got off on his attention, and I wasn't sure the Vagina Monologues were really about being free: I thought they were about rebelling against her parents.

And then there's this really weird scene in which Ginny is letting Lucky "practice" kissing her, while telling him that the first time a girl has sex is "pretty much never romantic." She warns Lucky: "So don't put any high expectations on it. Just try to get through it without hurting anyone ... Guys hate being out of control. And they hate emotions. And they hate feeling let down. So try not to take it out on the girl." She keeps insisting that Lucky has never thought about this stuff and that he needs to think about this stuff so he doesn't end up like "a date rapist or something." This is in between kissing him and telling him it means nothing.

Perhaps now you can see why I don't like Ginny. And I realize it's unfair for me to assume that Ginny is speaking for the author here, but I feel this authorial presence, this message coming through the prose. It's the only moment in the book where I was really aware that a woman had written it. Hmmmmm. I think I don't like it because there's no counterargument. Ginny makes these really negative statements about guys, and Lucky seems to accept them. No one else in the novel speaks up for guys. The only men in the novel are passive (Lucky's dad) or philandering (Lucky's uncle). Lucky himself is pretty wonderful, and maybe that's enough. But Lucky's been through so much crap that Ginny delivering this speech to him, of all people, seems harsh.

But another cool thing is that even though it's becoming clear that I don't like Ginny at all, that in no way diminishes my love of the book. If anything, it increases it. I love books that make me feel something, and this one definitely got to me. There's so much more I could say, but I'm going to stop and return it to the library so someone else can read it instead. I need more people I can talk to about it. It's definitely a conversation-starter.
Posted by xemilyx at 12:48 PM