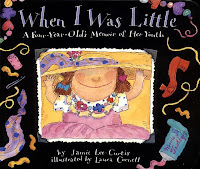 The curriculum at my school calls for the kindergarten students to write memoirs.  Hilarious, right?  The teachers like the students to read "mentor texts," also known as examples, before they start writing, so I'm on a quest to find excellent examples of memoirs for 5-year-olds.  Since my post on personification is one of my most popular posts ever, I thought I would share more of my picture book lists, starting with this one.

Now, I only know of one person who did something truly significant at the age of 5 or 6 and then grew up to write a picture book about it, and that's Ruby Bridges.  Her memoir, Through My Eyes, is a beautifully designed and well written book.  It will require some conversations about history and race that teachers might not be ready to tackle in the middle of a writing lesson, but no list of picture book memoirs would be complete without it.

Apart from this book, there are few true memoirs of little children, so I turn to fictional examples.

Amazingly, there's one book that perfectly fits the bill.  Annoyingly, it's by a celebrity author: When I was Little: A Four-year-old's Memoir of Her Youth by Jamie Lee Curtis.  The title says it all.  And just this fall, Curtis published a new book called My Brave Year of Firsts. Both books give children a way to organize their own thoughts, either by comparing their life now to their life when they were babies, or by making a list of the first times they did significant things (went to school, rode a bike, etc.).

James Stevenson has written a number of picture book memoirs.  The one I like best for K students is Fun, No Fun, because, again, it offers children a way to organize their own experiences.  It basically divides memories into two categories: fun things and not-fun things (duh).  What I like about this structure is that it captures memories of things that happened once, like going to the hospital for a broken arm, and memories of things you do over and over, like jumping in piles of leaves every fall.

Another book that inspires kindergarteners to write abut their own experiences is Kindergarten Diary by Antoinette Portis.  The only problem with this book is tense.  It's written in the present, and memoirs are generally written in the past.  Of course, K students probably wouldn't notice this, but I'm always careful about giving them off-kilter examples.  What this book offers that makes up for any problems with tense is a brilliant page layout that kids love to copy:

Something about fanciful mixed-media layouts against a strict blue-lined sheet of paper speaks to students.

There are many other picture books that describe memories, but two that stand out to me are Pictures from Our Vacation by Lynne Rae Perkins and I Know Here by Laurel Croza.  Both of these books emphasize place and pictures as ways to capture memories.  Pictures from our Vacation uses inexpert photographs taken by two kids to capture the unexpected aspects of vacations.  The underlying theme is how these unexpected aspects could be the most significant.

I Know Here would be a wonderful book for a child who was moving or a child who remembered another place (I'm thinking of the kids at my school who were born in DR or Honduras or Puerto Rico or Thailand).  I don't want to give away the last page, but make sure you flip to it if you're considering checking out the book.  It shows how pictures make it possible to carry a special place with you when you leave.

Now for some books I won't be using.  Don't get me wrong: they're distinguished books.  But they take memories and turn them into stories with beginnings, middles, and ends, and I want the kindergarteners to feel free to write meandering reminiscences.  (I know I'm overthinking this, but it's what I do, OK?)  So although I won't be using Tomie DePaolo's The Art Lesson, Patricia Pollacco's The Keeping Quilt, Donald Crews' Shortcut, or Rhaksana Khan's Big Red Lollipop, but they're excellent books.

There's also an impressive collection of memoirs in which children's illustrators explain the intersection of their life and work.  Last year, we were treated to Alan Say's Drawing from Memory and Ed Young's The House Baba Built; other stand-outs are Peter Sis's The Wall and Ashley Bryan's Words to My Life's Song.  Talking to Faith Ringgold is also particularly useful in schools, because each page can stand alone and includes prompts for students' writing and drawing, such as: "Do you have a memory of something that happened when you were younger? Draw or describe what happened.  Add a fantasy or dream to change the story." 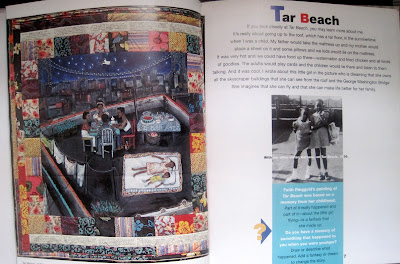 Most of these illustrator memoirs are too advanced for kindergarteners, although Eric Carle's The Artist Who Painted a Blue Horse might be worth a look.


::Listen to the toys

Finally, this list would not be complete without a mention of the tradition of writing fictional memoirs of toys.  Although these books might not be models for student writing, they are an important part of any child's reading.  I sincerely think every child should be introduced to The Story of Holly and Ivy, by Rumer Godden (illustrated by Barbara Cooney!); The Velveteen Rabbit, by Margery Williams; The Steadfast Tin Soldier, by Hans Christian Andersen; The Miraculous Journey of Edward Tulane, by Kate DiCamillo; and Toys go Out by Emily Jenkins.  These books go deep, exploring mortality and the vagaries of chance, taking up issues that rarely grace the pages of children's stories.

A personal favorite of mine, which is also a picture book, is Otto: the Autobiography of a Teddy Bear by Toni Ungerer.  It tells the story of a teddy bear who survives World War II, and although it's ostensibly written by a toy, it has exactly the tone of a real, traditional memoir.  It's a little melancholy and written in the voice of an old soul.  It may be fictional, but it may also be the perfect first encounter with a memoir.

I should mention two lists online that helped me begin to compile my own: Bank Street College of Education's lists of memoirs for younger children and older children.  They're wonderfully full and long and annotated.
Posted by xemilyx at 8:38 AM