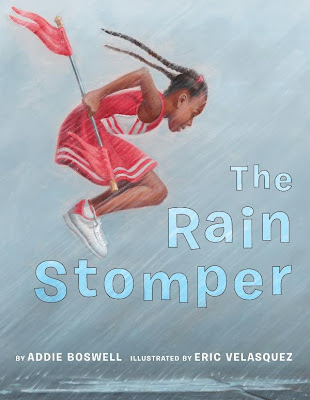 A teacher came in yesterday and asked me for examples of personification in picture books. The idea is to teach 5th graders about literary special effects, like onomatopoeia, personification, simile, metaphor, etc. I was like, oh great idea no problem. Then I was like, huh.

It was one of those reference questions that's harder than it sounds. I couldn't specifically remember whether certain books attributed human qualities and actions to non-humans.

What I was able to come up with was a list of things that are often personified in picture books: trains, toys, rain and wind. Animals, of course, but in children's books, toys and animals aren't just personified in the literary sense--they're given dialog. If they have faces, I think kids see them as characters rather than literary devices. Anyway, that was enough to get me started.

Here's what I gave her:

The Rainstomper by Addie Boswell, illustrated by Eric Velasquez. The rain and thunder are personified as the baton twirler's nemesis, but there are other examples as well--the flowers peek, the puddles shimmy.

The Curious Garden by Peter Brown. I'm a sucker for secret gardens and urban settings. In this book, a boy discovers a garden on an old train trestle and helps it grow until it decides to explore other parts of the city on its own, changing the gray industrial landscape to something that reminds me of the hanging gardens of Babylon.

Choo Choo by Virginia Lee Burton. Hopefully you still have an ancient copy of this one in your library. I'm not positive 5th graders are into vintage picture books, but this one is cute and spine-tingling. The destruction the runaway train causes gives me a falling feeling every time I read it. Oh, and obviously, the train is personified. You could also use The Little Engine that Could.*

Leaf Man by Lois Ehlert. I always imagine this one as a blues song. This book also suggests so many activities: leaf rubbing, nature walks, field guides, song writing. Then there are the gorgeous cutaway illustrations. Anyway, it's an example of personification that borders on transformation.

I'm sure there are others, but I think those will work with the teacher's plan of making lists of verbs and adjectives you can use to personify something. I just hope she doesn't want to do synechdoche next.

*I had no idea Loren Long did new illustrations for this in 2005! Sold!
Posted by xemilyx at 7:17 AM