I've been reading a pretty sweet blog: White Readers Meet Black Authors. I mean, if you're white and you know that you usually read white authors, how can you resist a blog with this address: http://welcomewhitefolks.blogspot.com/?

That's how I found Wench, which I'm in the middle of. It focuses on the lives of four women, living in slavery in the South, who are forced to play the role of mistress with the white men who own them. The setting glistens hot on the page, and the characters have to make impossible choices: attempt to run away, abandoning their children and possibly endangering the lives of the slaves who remain behind? or stay in slavery, subjecting themselves to the abuse of the men and the venom of the women, hoping to convince the white men to set their children free? 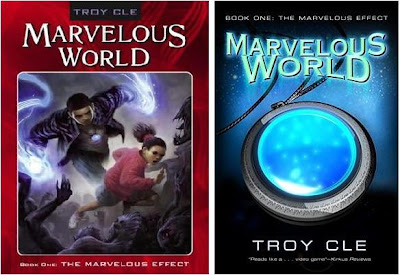 Well. There's absolutely no possible transition after that. But more relevant-to-children's literature, White Readers Meet Black Authors today had a reminder about Marvelous World by Troy CLE. I ordered the first book back when Vibe magazine was calling it the black Harry Potter, and the author was already imagining the films. And then I thought it fizzled. Not so!

The series has continued, the new covers look great, and there's a book trailer!

Now, when I read Marvelous World ages ago, I thought the sciency stuff with various dimensions didn't hold up well compared to the world building of, say, the DC Universe or the Matrix. Which I think it's trying to emulate. But I did like the way the characters talked, the and the sweep of the story. We're talking epic, interdimensional intrigue. And I thought some of the tricks the characters pulled, like sneaking into an amusement-park-cum-training-ground and channeling their powers to create a pimped-out flying car, would fulfill the wishes of thousands of kids.

I still say that what the series needs is a good editor, but if your kids are looking for more action sci-fi, then this is for them.
Posted by xemilyx at 8:16 AM