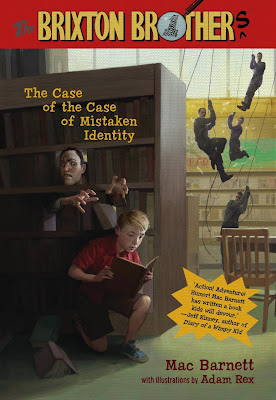 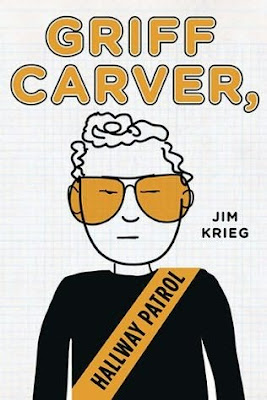 Do kids still read the Hardy Boys? I'm never sure about these genre things. Bizarrely, the Seventh Heaven paperbacks in my teen section still circulate, so I have a lot of faith in the staying power of series. I just read two mystery novels that feature tween detectives, both of which rely heavily on genre tropes, and one of which is a pastiche of boy detective series like the Hardy Boys.* What I'm wondering is whether kids will get the references, and whether they need to get them anyway.

The Brixton Brothers and the Case of the Case of Mistaken Identity, by Mac Barnett and illustrated by the fantastic Adam Rex, is not about two brothers. It's about Steve Brixton and his best "chum" Dana, who really prefers not to get dragged into Steve's amateur detecting schemes. But Steve is obsessed with the Bailey Brothers' mystery series, so by the end of this action packed book (it includes a car chase and an escape from a sinking fishing vessel), Steve tells Dana they're going to have to call themselves "the Brixton Brothers" because it sounds better.

The best running joke in the book is that everyone believes Steve Brixton is a private detective hired by the evil "Mr. E" to help steal a national treasure--all because he follows the advice in his Bailey Brothers' Detective Handbook. Of course, the advice is ridiculous. Or at least written to help children "play" detective: "Shawn and Kevin love a good booby trap. Trapping a crook gives their knuckles a break. You can trap baddies just like the Bailey Brothers! Just make like Tarzan and dig a hole in the ground, then cover it with sticks and leaves. Crash! Your unsuspecting suspect will fall right in!"

The humor in the book is consistently on point. My favorite scene is when Steve dresses up as a sailor--including a striped shirt, fake mustache, and eye patch--to infiltrate a tough fisherman's bar. When he gets in the door, he notices everyone is wearing jeans and flannel shirts. But is he daunted? No. "Yes, Steve thought, catching his reflection in a gaudy mirror. He looked more like a sailor than anyone in the place!"

So my conclusion about whether or not kids'll get it? I give the book a thumbs-up, and I think the excerpts from the Bailey Brothers' handbook are clutch. Not only do they amuse--they inform. Even if you've never read a Hardy Boys mystery, you know what kind of stuff the author is referencing, because he transcribes it for you. Plus, thanks to The Dangerous Book for Boys, plenty of kids have been exposed to an old-fashioned how-to book, whether or not they've been exposed to an old-fashioned mystery novel. Don't know if there's enough material in the Bailey Brother's handbook to sustain an entire series, but we'll see when the next Brixton Bros book comes out in Oct.

The other tween detective book I read was Griff Carver: Hallway Patrol, by Jim Krieg. This one is a riff on a film noir kind of tough-talking private eye, and I found it un-put-downable.** However, when I read part of it aloud to two kids, their eyes glazed. Could it be my attempt to impersonate a seventh-grade boy impersonating a hard-boiled PI? See what you think--from the scene when Griff signs up for safety patrol at a new school:

"Name and grade?" "Carver," I said. "Seventh." "Experience?" "Six Years," I told him, "four on the street, two inside." ... "Where?" he asked, still not impressed. "Saint Finbar's," I told him. I saw the wheels turning behind his eyes. He looked up at me again, scrutinizing my face like I was a cousin he hadn't seen in a long time or maybe I had chicken pox scars. "Carver. Griffin Carver?" he asked, suddenly interested. "The Griffin Carver?" "Heard of me?" I said. It wasn't really a question. But I'd been hoping my rep was a little more local. ... "Griffin Carver is famous." He said ... "The only Safety Patrol officer in history to get kicked out of school."

Great, right? Maybe it's just that kids prefer straight up humor to any kind of literary style. This book is very stylish, and in my experience, most kids don't care. They care about a good story, a funny line, an action-packed plot. The writing style is just packaging that they rip off on their way to understanding what's happening. By the time they're teens, narrative voice starts to matter a lot more, because they develop that radar for authenticity. But that's another post.

So I loved this book because it was stylish and I was looking for people to read it out loud to. However, it has lots more going for it, so I still think kids will adore it if they give it a chance--even if it takes itself more seriously and doesn't contain the key to its own puzzle the way the Brixton Bros does.

For one thing, the book is actually told from a variety of perspectives--Griff narrates some of it as part of an interview with the school counselor. His partner, a rookie hallway patrol office and "camp scout" who always plays by the rules (and loves gimmicky detective gear, like listening devices--perhaps he also reads the Bailey Bros?), narrates some of it via reports he files with the hallway patrol captain. And a few scenes are straight out of the diary of the school newspaper editor, Violet.

The characters are all stock, and I admit the conclusion is somewhat predictable by the time we arrive at it--I was hoping for a really shocking twist, but that's OK. The approach to the conclusion has so many switch-backs and changes in perspective, that I kept reading and reading, because I felt like the plot was spinning around me, and I couldn't focus on anything long enough to figure it all out. Griff has to use all his maverick, rule-breaking techniques to uncover the clues one by one, and his relationship with the "camp scout" has a believable evolution from disgust and distrust to blood brotherhood.

So I give this a thumbs-up, too. Ultimately, I liked Griff Carver better, but I think the Bailey Bros is more accessible. Did I mention it's heavily illustrated? I think you could hand the Bailey Bros to some fans of Diary of a Wimpy Kid, although it's a different flavor of humor. Griff Carver is definitely a book for those kids who are too smart for their own good. I love those kids, don't you? Although they're also awfully picky about books sometimes. Both of these are good choices if you're trying to beef up your selection of boy-friendly books, and they both appear to be the beginning of series.***

*Aside: Before Chelsea Caine wrote the series about the female serial killer, she wrote a send-up of Nancy Drew novels that was hilarious and slightly disturbing. Apparently, Nancy was banging everyone. I kept thinking of that as I read this.

**Anyone seen the movie Brick? Cuz it's awesome.

***The Griff Carver book says nothing about being a series, but we're totally left hanging about Griff's relationship with his older brother: why does Griff call him "the creature" when they obviously used to be tight? And it's not over between Griff and the too-slick school politician Marcus Volger. Surely there will be another book about Griff's solitary quest to bring down the most popular boy in school?
Posted by xemilyx at 7:04 AM