And now for some eco-criticism

A recent study found that award-winning picture books today portray man-made environments twice as often as natural environments. I know, it sounds like a bad thing, but part of me loves it. As a librarian in an urban environment, I've always felt like there was a bias towards farms and woodlands in children's books. Turns out I'm wrong!

I was introduced to this study by a blog post that does a pretty good job of putting it in context, challenging the study's conclusion that "today’s generation of children are not being socialized, at least through this source, toward an understanding and appreciation of the natural world and the place of humans within it." 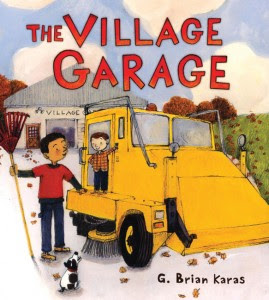 I've seen this kind of literary criticism before: studying the portrayal of the natural environment the way you might study the portrayal of women or minorities or people with some kind of "otherness." I'm not sure I buy the natural environment as an "other," although I do think it would be interesting to study its portrayal. I guess I don't think those two categories--natural and man-made--are that helpful.

Some of my favorite books for teaching children about natural phenomena feature "built" environments--Peter Brown's Curious Garden, Addie Boswell's (or should I say Eric Velasquez's) Rain Stomper, G. Brian Karas's Village Garage. I just handed two of those three to a kindergarten teacher who was doing a unit on weather.

So I'll keep looking for a better model for analyzing the role of the environment in children's books. Although there's lots of personification of the setting in books for kids, I don't think treating the natural world as a character is the way to go.
Posted by xemilyx at 8:31 AM