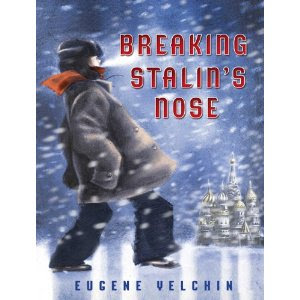 Are you suspicious of literary devices in children’s books? I guess I am.

What it's all about

I just finished Breaking Stalin’s Nose, and I am sincerely impressed. It’s the story of a little boy whose father is arrested the night before the boy is supposed to join the “Young Pioneers,” which are sort of like Stalinist boy scouts. Raised to be a good Communist, the boy is sure there’s been some mistake and that Stalin will fix everything in time for the induction ceremony.

The reader senses the truth from the beginning: that the boy is now truly alone. Not only will his father never return, but the other adults in his life will turn away from him. Even his kindly aunt fears that taking him in will brand her as a traitor, too.

However, what makes this book a true thriller is that our protagonist, Sergei, as well as two other outcast boys in his class, take matters into their own hands. They don’t wait for the adults to save the day. When the nose is broken off of a statue of Stalin in the school hallway—an “unspeakably monstrous crime,” according to the principal—each boy uses the act of vandalism to carry out a small rebellion.

I loved this book. Some people have said children would need a basic understanding of Russian history to appreciate it, but I completely disagree. The narrator may live in Stalinist Russia, but he doesn’t understand it. We discover the true, twisted nature of the regime along with Sergei. And you don’t need to understand the politics to appreciate the message about figuring out right and wrong for yourself.

Why I mention literary devices

There was just one scene that I questioned: it’s when Sergei has a dream sequence or hallucination or something in which Stalin’s nose appears, dressed in uniform with little arms and legs, smoking a pipe and telling a disturbing story.

Right before Sergei has this vision or whatever (he’s in a Biology lab, so maybe there are fumes?), he overhears a literature professor talking to students about a story called “The Nose.” I’ve never read the story, but apparently, it’s about a nose that dresses up in a uniform and starts giving orders. The moral of the story is that we can’t let other people (particularly not noses dressed in uniform) tell us what is right and wrong.

Breaking Stalin’s Nose makes use of literary devices—an unreliable narrator, heavy symbolism, allusions to other literature, dream sequences—that are familiar to me in adult literature. But I’m not used to seeing them in children’s books. There’s a particularly interesting contrast between Sergei’s voice—a perfect 9-year-old voice, in my opinion—and the intrusion of the Literature professor’s explanation.

“I hear teacher’s voices, feet marching to an accordion, chalk knocking against blackboard, someone practicing a bugle. Everyone is learning to be useful to our country. Everyone is marching toward Communism, everyone but me.”

“What ‘The Nose’ so vividly demonstrates … is that when we blindly believe in someone else’s idea of what is right or wrong for us as individuals, sooner or later our refusal to make our own choices could lead to the collapse of the entire political system.”

Now, that’s the point of the whole novel, encapsulated pretty succinctly, but the passage is still more abstract than the storytelling in the rest of the book. Why is this explanation inserted? Is it an homage to Russian literature? Is it supposed to settle in the reader’s unconscious until the day when he or she can understand it? Does it enhance the story in some ineffable way, whether the reader understands it or not?

This brings me to a larger question about literary devices in general: do they work best when we notice them or when we don’t notice them? Are they like special effects in movies—as soon as you notice them it un-suspends your disbelief and ruins the story? Or are we more aware when we’re reading that the story is a construct—because we are constructing it as we read—in which case we enjoy the way literary devices take us behind the scenes?

When I was in high school I looooooooooved noticing literary devices because it made me feel like I was cracking the code of great novels. As I got older, I was much more likely to roll my eyes and say, just tell me a story, author. I think that’s partly because of what’s happened in literary criticism—we’ve veered away from deconstruction and are back to comparing literature to reality and discussing how things in the real world are portrayed in novels.

To bring it back to Breaking Stalin’s Nose, I feel like the author indulged a little with the Nose sequence. It’s like the radio addresses in Atlas Shrugged but not as bad. I think whether children understand it or not, it will take them out of the story, because it’s so obviously laden with meaning and unlikely to happen in real life.

However, I can think of one reason why the author may have intended to knock the reader back to reality: to make the reader reflect on his or her own life. Maybe the author wanted to go timeless for a minute, to stop the story and make his larger point so you would get the message that this isn’t just about Stalinist Russia, it’s about all people having to sort out right and wrong for themselves.

Or maybe not. Either way, I’ve read it and I’m a believer: this is a great novel for children. Twists and turns. Bold acts of rebellion. Expressive illustrations. Glittering city setting. Cold hard truth. No Deus Ex Machina. That’s how I like my historical fiction.