The good news and the bad news about the Hunger Games 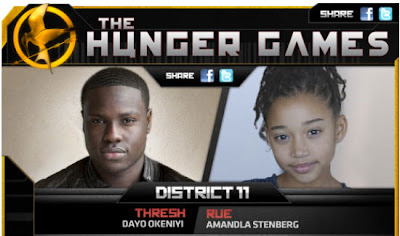 The bad news is that Katniss is played by a white girl, even though the book describes her as olive-skinned and dark-haired.

The good news is that a number of significant characters are played by people of color.

The bad news is that some audience members were so offended that Rue and Thresh were played by black people, even though the book describes both characters as dark-skinned, that they posted predictably but still infuriatingly stupid comments in Twitter. (Lenny Kravitz as Cinna was not as big a deal, apparently, although there was some stuff about him on Twitter when the movie posters first came out.)

The good news is that Rue and Thresh elicited the most powerful emotional reactions of any characters in the film, and that isn't allowed to happen in the mainstream media as often as it should be.

The bad news is that Rue and Thresh were sort of magical negroes.

The good news is that the book is better than the movie, because it spends more time developing Rue and Thresh's characters. Oh yeah, and in the book, we could see Katniss as a woman of color.

At least, that's what I got out of the debate. I also like the New Yorker blog post, which talks about how rarely blackness is equated with innocence and how often white readers just assume everyone's white--at least everyone they find themselves caring about.

I wonder what Suzanne Collins will eventually say, if she says anything.
Posted by xemilyx at 1:36 PM