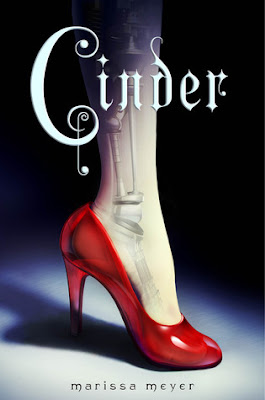 A short review this time, ladies and gentlemen: Hurray for Asian heartthrobs! The End.

Just kidding. But seriously, I'm always on the lookout for leading Asian men in YA lit, because my boyfriend's Asian, and one thing he often points out is how rare it is to see an Asian man paired with a black or white woman in the media. You'll see Asian women with black or white men, but not the other way around. He believes this is related to the long history of stereotyping Asian men as asexual. So that's another fun game to play while watching commercials: tallying the varieties of interracial couples!

While I'm on the subject, shout-out to Jenny Han's North of Beautiful, which features a wonderfully complex Asian love interest.

Now back to Cinder. This book is based on a concept I wish I'd thought of: setting a fairytale in the future. Donna Jo Napoli, Gail Carson Levine, and Shannon Hale have mined the rich vein of fairytale plots for a number of popular and acclaimed novels. But usually, they use historical settings. Cinder is straight-up Sci-Fi. I can see this launching a whole subgenre, the way Pride and Prejudice and Zombies launched a mash-up subgenre including Abraham Lincoln, Vampire Hunter, and Android Karenina. Perhaps this book is even related to that adult lit phenomenon.

In this case, our Cinderella character is a cyborg mechanic working in future East Asia, where a strange plague is mowing down citizens. Cinder tries to hide her cyborg status, because cyborgs are considered second class citizens who can be drafted or sold by their legal guardians to undergo plague research--in other words, to be infected with a disease that has no cure and kills within days. Thus, Cinder tries to keep on the good side of her guardian, harvesting parts from the dump to keep her repair service running and handing over all the proceeds.

Shortly after we meet Linh Cinder, her market stall is visited by a surprising customer: Prince Kai. He wants her to repair an outdated robot. Mysterious, eh? Some chapters of the novel are told from the Prince's perspective, and he has problems of his own: his father has just been infected with the plague and he's being pressured to marry the evil ruler of a colony on the moon. Everyone on Earth fears the "Lunars," because they have evolved differently from Earth-bound humans, developing the ability to manipulate the thoughts and emotions of people around them.

Now, this is one aspect of the book that confused me a little. The story is set in future East Asia, and most characters have Asian names. The prince has "copper" eyes and straight dark hair, so I assume he has some Asian physical characteristics, and I assume the other characters with Asian names do, too. The Lunars, on the other hand, are described as almost preternaturally pale (milky white skin, etc.). So wouldn't the Lunars stand out in an Asian community? However, we learn part way through the book that there are a number of Lunars hiding in plain sight. So I guess it's better to assume that future East Asia is a very diverse community.

This is believable, since the story is set 200 years in the future--plenty of time for migration and intermarriage. And I bet the author didn't want readers to put her futuristic characters in census survey categories. But I wish she's been more explicit about the appearance of the characters since the plot hinged on Lunars being able to blend in. Since she wasn't explicit, you can actually read the novel as though everyone in future East Asia is white.

Although I had questions about the future society in which the story is set, I did like the setting: a gritty, high-tech city overlooked by a gleaming castle and research facility. I also found the main characters endearing, although I didn't find their romance entirely believable. But what really kept me reading were the more villainous characters--the doctor who studies Cinder and the Lunar Queen. The doctor was interesting because he was hard to figure out--he did some despicable things but didn't seem cruel. You could sense that he had reasons for conducting his experiments on cyborgs, and I found him interesting precisely because I didn't trust him. And the queen was wonderful because she was just so powerful. With a villain that evil and in control, you really wonder how the characters will defeat her.

Of course, you don't find out in this book, because it's the first in a series, which I didn't realize until I got pretty close to the end. In fact, despite what I liked about the book, I wasn't sure I wanted to finish it. I guessed some of the twists way before the author confirmed them, and I wasn't sure there were any surprises left. But as I got closer to the end, I found myself sucked into the action. One thing I can definitely praise this book for is the rollicking good story. There were times when I wondered why Cinder wasn't working a little harder on repairing the prince's android, but I can't complain about the pace at the end. It was action-packed!

So after going back and forth about this first installment, I can promise I'll be reading part two. I think this book had brilliant ideas plus a few problems in execution. It still stands out as a romantic adventure story with plenty of action and a unique concept. Oh, and a sweet Asian hero.

*Edited to add: And there's a prequel called Glitches on the Tor site (via Read Now Sleep Later)! You can also buy a Kindle whatever-you-call-it-one-shot thing. But I remain conflicted about Kindle things. My favorite line from the prequel: "Condensation sprang up on Cinder’s steel hand as she went from the chilled air to the house’s warm entryway." And check out the artwork! The illustrator shows sketches and explains the concept here. Something about the Lunar Chronicles seems to inspire the kind of art I want on my wall. 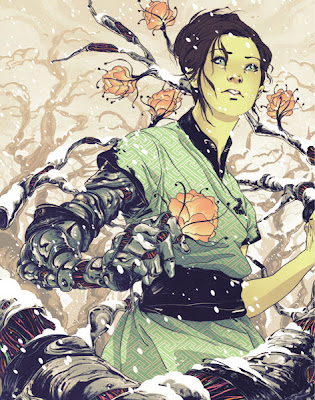