When the peeps at the Good Comics for Kids blog published their first core title list, I think I called it the most helpful thing on the internet that month.  Well, it's been updated!  And in addition to pointing you to the new list, I wanted to break out one category and look at the choices. 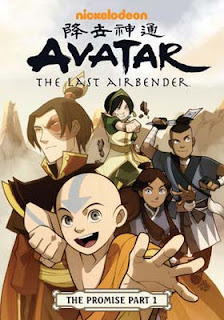 So let's look at superhero and commercial properties (by which I mean characters owned by companies and depicted across platforms, like Transformers, Avatar, Ninjago).  I want to look at this category, because it's still an overlooked and sometimes maligned category.  Although we know how important these action series can be in the development of readers, I think librarians get nervous about buying series that might just be thoughtless spin-offs of games and TV shows.

For example, there's a new Avatar GN written by Gene Luen Yang.  Gene Luen Yang, people!  I assumed the librarians would be all over that.  But there isn't a single copy in a public library in RI.  Apparently, a fear of comics featuring commercial properties is stronger than the power of a Printz winner's name recognition.

There are also fewer real comic-y comics published for kids.  Although kids love to read superhero comics, as a school librarian, I only buy comics that are intended for children, and that really narrows the field. That's why I think it's important to know which GN featuring popular characters are worth buying, because there are good ones out there, and they mean a lot to some of our readers.


Here's what the GC4K contributors recommend for grades 3-5:

I want to briefly note for purchasing purposes that some of these DC titles will be available in hardcover through Capstone this fall, and the Star Wars hardcovers are available through ABDO (Spotlight).

So there you go: a focused list with which you can introduce kids to important characters in the American canon.  Add to that the Marvel picture books I reviewed and you've got a nice superhero collection for young children. I'd add the Ralph Cosentino books, too, actually--especially for the Wonder Woman book.  And whatever you do, don't skip the Star Wars, because it features characters of many colors.  (I haven't read all of the others, so I'm not saying they don't.)

Now I'm going to take my own advice and get the Transformers GNs for my library.
Posted by xemilyx at 8:21 AM