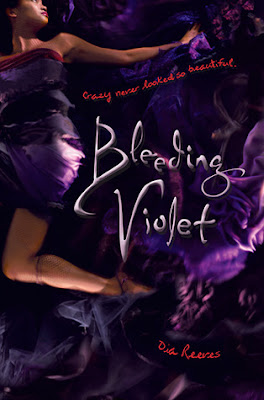 As soon as I realized the main character in Bleeding Violet was an Afro-Viking, I had to read it.  I've also been meaning to read The Girl who Fell from the Sky by Heidi Durrow and Quicksand by Nella Larsen, but those books don't have monsters.

Afro-Viking is a cool word for the child of a Scandinavian parent and an African or African-American parent.  I'm not positive the main character in Bleeding Violet counts, because her mother is African-American and her father is Finnish.  Finland is not always considered part of Scandinavia.  But I rarely get to use the term Afro-Viking, so I'm going to keep using it until someone corrects me.


In the opening scene of the book, Hannah sneaks into her mother's house.  It's the middle of the night, in a small town in Texas, and although Hannah has never met her mother, she is determined not only to live with her but to win her love.  Hannah is an unusual girl: she only wears purple and often converses in Finnish with her dead father.  Oh, and she may have recently murdered her aunt.

Surprisingly, Hannah's unusual qualities are perfectly suited to the task her mother assigns her: Hannah can stay if and only if she can "fit in" at the local high school.  It turns out that the local high school, like the rest of the town, is plagued by monstrous creatures.  They do things like turn people to glass statues or impregnate them with winged creatures that eat their hosts from the inside out.  Most "transies," or transients who move to the town, go mad when confronted with this kind of reality.  Of course, Hannah is already a little mad.  So she's unfazed.

Rarely have I read a book that so disrupted my sense of moral order.  It's clear that Hannah will do almost anything to win her mother's love, even if it involves mangling and betraying others.  And Hannah's mother will do almost anything to escape the responsibility of loving and being loved.  At the other extreme are the Mortmaine, the town's emergency response team--monster hunters who are trained to put their duty before their feelings for friends and family.  If someone you love's possessed or controlled by a monster, kill 'em.  Best way to stop 'em.

Both these extremes of behavior lead to a lot of bloodshed, and while two of the cruelest characters get a comeuppance, it's hardly a battle of good versus evil.  It's a battle of Hannah vs. every-damn-thing-that-gets-in-her-way, with plenty of civilian casualties.  It's also a love story, and although the love is a mother-daughter relationship, it's no less romantic or tortured than the tale of a sexual relationship.

And finally, it is a horror story.  I don't read a lot of horror, so I can't compare it to other titles.  I can say that it occasionally gave me an honest-to-goodness fright. The writing is seamless and when something disturbing occurs, the author never changes tone.  The horror just sort of unrolls and because you don't see the monstrous scenes coming, you find yourself in the middle of them in a way that can be pretty scary.  It's a testament to the author's talents that you never have to go back and reread to figure out WTF just happened.  It's all so well timed and handily described that you just go with it.  That said, it wasn't turn-all-the-lights-on-in-the-house scary.  I didn't feel scared while reading it.  I just felt sort of mesmerized.

But what truly amazes me about this book is that although I never knew what was going to happen next, I always believed there were rules.  It reminded me of the magic in Terry Prachett's books: creative and unpredictable, but things like wishes and curses and death still count for something.  There's no cheating, no deus ex machina. The characters almost seem to welcome the final showdown as a chance to test their particular abilities against worthy opponents.  It's the character who relies on brute force rather than creativity who is most embarrassingly defeated.

It's hard not to wonder about what the characters' different abilities represent--particularly the swan that Hannah's father carved for her, which comes to life at certain times.  Is it the embodiment of her father's love for her?  I mostly resisted assigning symbolic meaning to anything in the story, because I don't think that's what the author intended.  However it's impossible not to notice the theme of parental love as a mostly destructive force.  I think this book will resonate powerfully with teens who are simultaneously rejecting their parents and desiring their respect.  If the purpose of horror is to embody and explore the anxieties of its audience, then I think this book succeeds epically.
Posted by xemilyx at 11:50 AM