Review: The Chaos by Nalo Hopkinson 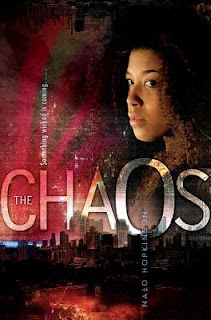 What if you worst insecurities were revealed--not just with words but with physical manifestations, like a rash on your skin or an angry monster that followed you around?  That's the nightmare scenario that plays out in Nalo Hopkinson's The Chaos, the freakiest YA novel I've read since Libba Bray's Printz-winning Going Bovine.


The story begins innocently enough, with a common literary device: the English assignment.  Scotch (short for Scotch Bonnet because she's hot as the pepper) answers a series of questions about her likes and fears during the last few minutes of her English class.  She writes that she's beefing with her best friend, that she loves dancing and wine gum jelly candies, that she recently moved to a new school, and that if she doesn't win next week's dance competition, she'll have to break a promise to her brother.

It's obvious she's leaving some things out, but she does tell us two creepy secrets: there's a sticky black rash spreading over her body and she sometimes sees things ... like floating horse heads.


Hopkinson shows she can write good realistic fiction.  But this is not realistic fiction.
The opening scenes of the story are so well written that I would have been happy to read a slice-of-life story about Scotch trying to stick a few tricky dance moves, fix her relationships, and maybe, um, get some medical help.  Seriously, this would make a great realistic fiction novel: the dialog is catchy and the characters definitely pop.  Rarely have I read an author who can sound so convincingly like a teenager, deploying slang like damn/SRSLY/ginormous/mad props/whatever/and shit in the same sentence as archaeopteryx.  Which is exactly how teens talk.

However, this is not a realistic fiction novel. Eighty pages into the story, a volcano bursts out of Lake Ontario, and the city of Toronto, where Scotch lives, turns into something out of the imagination of Hieronymous Bosch: cars grow cheetah legs, sandwiches grow teeth, and bathroom stalls turn into grandfather clocks that play the Sesame Street theme song.

One of the strengths of this novel is the creepiness of it.  Reading it is like watching a youtube video that you know is going to end with something disgusting or painful, but you can't look away--a completely addictive sensation.  If it were an ice cream flavor it would be fascination with swirls of shame.

But here's the problem: the author introduces some profound real world problems in the first part of the book, and I expected her to resolve them somehow in the second part--albeit in a fantastic or metaphorical way.  And I can't figure out if she did that or not.

Now, I know that this isn't a C.S. Lewis novel, and it's not cool to ask questions like, "What does the rash on Scotch's body symbolize and how should we interpret the change in her skin color at the end of the novel?"  But I can't help myself!  For one thing, I love symbolism.  And for another, this book is full of folk and fairytale imagery: Haints, duppies, a rolling calf, Baba Yaga, a phoenix, Sasquatch, and Brer Rabbit all make appearances.


For more on Jamaican folklore, see Martha Warren Beckwith's book at sacred-texts.
With all of this folk and fairytale imagery, I was expecting Scotch to go on some kind of hero's journey.  In fact, I was expecting her to metaphorically take on the problems introduced in the first part of the book.  This was reinforced when Scotch's best friend Ben suggested that people's secret desires are becoming real.  Scotch angrily asks him whose secret desire it was for people to die in the volcano and resulting flood. Ben shrugs and says:


"I'm just saying, people are crazy.  We make the world a crazy place.  Maybe some of it is that our crazy isn't invisible any more" (137).

So I figure Scotch's crazy is symbolized by the rash on her body, which seems to be turning her into a human tar baby.  Then, near the end of the story, Scotch has a waking dream in which her parents retell the story of Brer Rabbit/Brer Anansi and the tar baby.  For a second, I thought the story was headed for a satisfying conclusion in which Scotch uses the wisdom of her ancestors to defeat the rolling calf, which symbolizes her fear of being bullied and labeled by her peers. But the tar baby isn't a living creature in the folktale, so how can that story help Scotch figure out how to defeat the rolling calf that's chasing her?  Or is the rolling calf just a tar baby come to life?  In that case, is Scotch Brer Rabbit/Brer Anansi, punching and kicking a sticky ball of nothingness?  What's the lesson?  That she should just stop punching and kicking?

I had an easier time following the Russian folktale elements.  Like many a fairytale hero, Scotch stops to help a wild creature in need, and later that wild creature helps her.  She also passes through the witch's oven (and into the volcano) to finally confront the rolling calf, and that makes some kind of sense to me, too. But I can't relate it to the problems in the first part of the story.

And I have no idea about the delicious glowing white orb, the volcano, or the dream in which Scotch has 11 legs and a beak and gives birth to a baby on the subway.


::An attempt at interpretation

However.  Having read what Nalo Hopkinson herself has to say on her blog and in interviews, I think she'd like me to draw my own conclusions about her work rather than just complain that I don't get it.  So here goes.   (Beware, it's about to get spoilery.)

The moral of the story is:

And when things like that do happen, stories can help us--not by telling us what to do but by reminding us that other people go through strange and terrible adventures, too.

At the beginning of the story, Scotch is so afraid of being labeled a "skank" like she was at her old school that she cuts herself off from the people around her--preemptively breaking up with her boyfriend, beefing with her best friend, skipping dance practice, lying to her parents, and spending the money for an apartment with her brother on a bunch of new clothes.

But at the end, both her brother and her ex-boyfriend see her completely covered in her sticky rash, and they're just relieved she's "okay."  So she throws herself and the beast that's spitting the tarry substance at her into the volcano until the rash melts into her skin, until how she looks on the outside matches how she thinks of herself on the inside.

How does this help a kid who's dealing with being bullied and labeled?  I repeat: stories can help us--not by telling us what to do but by reminding us that other people go through strange and terrible adventures, too.

Yes, please, someone else read this and tell me what you think is going on!  This story is a fascinatingly weird ride as well as a serious meditation on issues of race, sexuality, and physical ability (I didn't even get into that in my review but it's discussed here and here).  I just wish Scotch had faced her fears in a more satisfying final showdown.  But maybe she did, and I just didn't get it.  What do you think?