Rape Culture in YA Fiction: Survivors can be Heroes too

Last week, on the Stacked blog, Kimberly posted an interesting discussion about rape in the Chemical Garden trilogy.  The commenters help refine her argument, so I encourage you to read the comments as well as the post.  I am always interested in what other people have to say about rape in young adult literature, because I'm often not sure what I think about it.


On one hand, rape happens to one in five women and is under reported among men.  We have to honestly face the fact that rape happens in our community before we can stop it.  On the other hand, rape is a trigger for a lot of people.  Does reading about it really help stop it?  Or does it just victimize and/or desensitize the reader?

I haven't read Wither or its sequel, but I did think about the issue of rape recently when I read Froi of the Exiles, by Melina Marchetta.  There's a lot of sexual violence in that book and in Finnikin of the Rock.  Not only that, but the source of conflict in the second book is a curse placed on the kingdom of Charyn which prevents any of its people from conceiving children.  The only way to break the curse is for the last two children born before the curse took effect to have sex and conceive.  You can see how this leads to systematic rape.

I would go so far as to say that most of the women in the Lumatere Chronicles are survivors of sexual assault.  Certainly, in Froi of the Exiles, both of the main characters have been sexually assaulted:


Quintana, the princess of Charyn, has been systematically raped by people who hope to break the curse on her kingdom.  At least partly because of the abuse (although it's more complicated than that), she seems to have multiple personalities, one of which is very childlike.

Froi, a street thief from the first book, has not only been raped but has attempted to rape someone else.  The author shows us that Froi knows what he did was wrong, that he refuses to forget it, and that the people who care about him have instilled in him a new set of social norms.  But still.

Marchetta decided to make these two her romantic leads.  Nothing like giving herself a challenge, right?

::What does the blogosphere say?

I was conflicted enough about these choices that I sought out other reviewers' opinions online. A lot of bloggers said they had a hard time relating to the two main characters in Froi of the Exiles, that they found them alien and strange, that they didn't think their relationship was as romantic, that they couldn't have a happy ending.  But I think Flannery at the Readventurer summed up the arguments against this relationship best:


"I couldn’t get behind a relationship that disgusted me from the onset. To sleep with a girl who has never had a healthy relationship with anyone, especially if you are doing it under even quasi-false pretenses is a bit scary. I don’t want to call it sexual abuse but it kind of felt that way to me. I know many other readers feel that Quintana is an intriguing character and love her down to the ground. To me, she felt like a confused, somewhat simple-minded girl with lots of strength and motivation but who was absolutely vulnerable nonetheless. I don’t require a strong heroine all the time, that isn’t the issue. The issue is a balanced relationship and here, I just never saw it."

On the other hand, some reviewers thought that Marchetta succeeded in showing that Froi had changed enough and that Quintana was strong enough for them to be equal partners in a romantic relationship.  For example, here's Heather at the Fly Leaf Review:


"But I wondered, would I, or any reader be able to get past the fact that Froi tried to rape Evanjalin? Granted, Froi's circumstances growing up no doubt led to his actions, but does that excuse them? The answer is, of course, no. After reading Froi I read an interview Marchetta gave in which she responded to that very question. She stated that the only way to devote a book to someone like Froi, who starts out with such a heavy strike against him, was to never allow herself as a writer to forget what Froi tried to do, never let the character of Froi forget what he himself had tried to do, and  to never let the reader forget what Froi tried to do ... And you know, amazingly enough, Marchetta accomplishes just that. I never would have thought it possible, but I fell for Froi, flaws and all."

Personally, I was completely caught up in Quintana and Froi's romantic relationship and I liked them even better than the heroine and hero from the first book.  However, I wouldn't necessarily argue with what Flannery at Readventurer said.  She makes some really good points, and I'm not sure there's going to be a consensus on a book like this: it's interesting precisely because it's divisive.

::Survivors can be Heroes 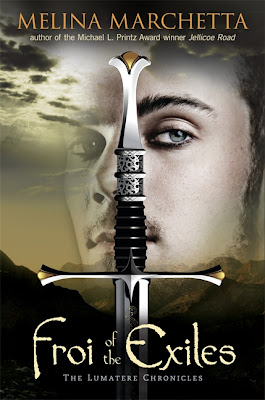 However, reading Kimberly's post about Wither helped me clarify what I like about what Marchetta did--or tried to do, in Froi of the Exiles.  Whether you believe that she succeeded or not, she tried to write a romantic, epic fantasy for YA in which both the romantic leads were sexual abuse survivors.

So often, when sexual violence is included in YA fiction, the assault happens to someone other than the main character--a side-kick, a friend, a somewhat disposable character.  Or it almost happens, but the main character is saved at the last minute by some unrealistic deus-ex-machina.

I'm reading a book right now (review soon) in which the main character was enslaved in a salt mine where her captors did everything they could to break her spirit ... except rape her.  I don't even know why the author felt the need to be explicit about whether or not she was raped.  She was abused and tortured in a salt mine.  That's enough info for me.  But at one point, a male character specifically asks if she was raped, and she says no, although other women were raped, she wasn't, because the guards were afraid of her and they may have been bribed.  I feel like what she's really saying is, "Don't worry! I'm still pure for you!"

That's one of the critiques of the Chemical Garden trilogy: these are books that deals with rape culture, but the author employs a number of weird plot twists to spare the main character.  Other people in her situation are forced to have sex, but not her.  She's special.  And when authors portray rape culture but then exclude the main character from the pervasive sexual violence, I think, is it because they think readers won't to relate to the character?  because then the character would be defiled forever?  because only weak or promiscuous people get raped?


If the main character is too tough, smart, or special to get raped, what does that say about the characters who do get raped?
Obviously, I'm not saying that I want to read about more characters being raped.  I think it's cool when authors create worlds in which women and men don't have to worry about being raped.  I would like to go live in those worlds.  I also think it's cool when authors write a story that takes place in a war-torn fantasy world or a post-apocalyptic dystopia or a college campus* where rape happens, and they show how it affects everyone in the community.  I don't like it when authors portray rape culture as something that only affects certain women.  That just reinforces the kind of social norms that enable rape culture in the first place--like blaming the victim or treating survivors like fascinating, exotic others**.

I really admire Melina Marchetta for choosing to write a story in which people who have survived sexual abuse get to star in a sweeping, romantic epic.  I like the message she's sending.  Instead of saying to survivors: now you're marginalized.  You can be the side-kick, the plot device, the example for everyone else, but not the romantic lead.  She's saying: you can be the star, you can heal, you can have an epic fantasy adventure, you can rescue other people.  Everything is still in front of you.

Reviews of Froi of the Exiles at:

Tia's Book Musings
Janicu's Book Blog
Mountains of Instead
a Chair, a Fireplace, and a Tea Cozy

*since according to data from 2010, "an estimated 20% to 25% of college women in the United States have experienced an attempted or complete rape during their college career."

**This rarely (if ever?) happens in YA fiction, but in adult spec fic, rape is sometimes used as a backstory to show why female characters buck gender norms or possess special powers.
Posted by xemilyx at 12:28 PM