I'm reading Chickadee by Louise Erdrich, and I can't get over how girly the cover is.  I know that's an irritating adjective--girly--but seriously, this book is being marketed to girls.  Which I think is a real missed opportunity, since it's a fierce kidnapping adventure story that would appeal to boys, too.  Especially boys who like Avi's The Fighting Ground or Cynthia DeFelice's Weasel.  But how many of those boys will pick up a book with a flowery border?

I knew the cover was reminding me of something, and I assumed it was the Little House series with its checkerboard border, but when I started thinking back on other borders, I realized Chickadee was really reminding me of this: 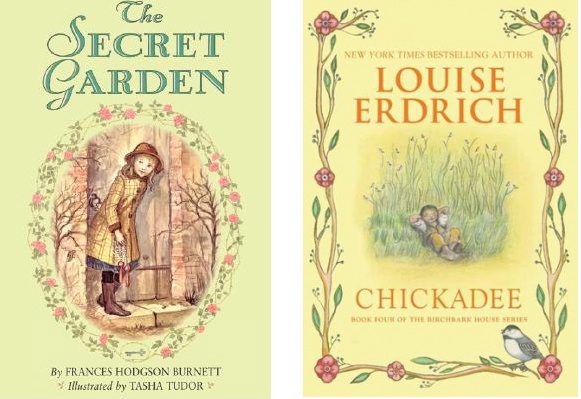 In fact, the Chickadee cover reminds me of a lot of classic "girl" books I read when I was younger.  The original covers of these books may not have had borders, but the adorable paperbacks I bought in the 80s and 90s certainly did.  I think borders are definitely code for "old fashioned."

Some more recent books that are trying to harken back to another era have also employed borders to set them apart.

But not all of these borders are flowery and girly.  Why is Chickadee getting this treatment?  It's true that this is the latest a series that of books that have, up until now, featured a girl as the main character.  People talk about Omakayas like she's the Ojibwe Laura Ingalls Wilder, but I think that's sort of a narrow view.  The series is based on Louise Erdrich's family history.  It's rich in details of daily life in an Anishinabe community and unflinching in its portrayal of harsh winters, small pox, and the consequences of white people's encroachment.

The only book in the series to have a different look in paperback was The Birchbark House.  As you can see, they went with a more realistic portrait of Omakayas. 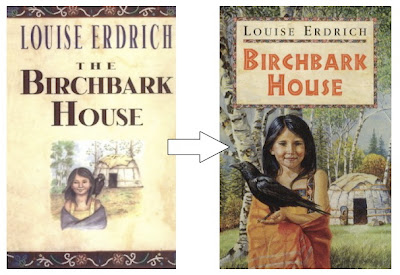