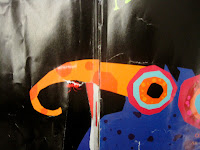 One way to measure the popularity of a book is the amount of destruction it has sustained.  I'm not talking about one-time acts of destruction, like dropping a book in a toilet, letting a dog chew on it, or using it as a coloring book.  I'm talking about the day-to-day wear and tear that comes from being loved by a kindergartener.


Watching kindergarteners choose books is sort of like watching animals in the wild.  Most of them can't actually read yet, so they're not making choices based on the titles and descriptions of books, or on the signs I use to mark different sections.  They don't know much about what other people like to read and they have very short attention spans.  So what actually attracts them to a book is either really obvious (they like trains) or completely mysterious (a book about fruit? was she hungry?).

What I'm saying is, they often aren't very good at judging what a book is actually about.  And I'm also saying that it doesn't matter.  They're just going to make up a story or walk around showing off a cool illustration, or they're going to wear the book as a hat.  That's fine.  They are learning to appreciate books as objects. I encourage them to explore and experiment.  Just not to put the books in their mouths.  Please.

I also try to purchase books my kindergartners will like, even if this is hard to predict.  And the best way to predict what they will like is to look closely at the books that have been destroyed in the past year.  Sure, there's circ data, but then there's destruction data, which shows not only how many times a book was checked out, but how many times it was actually opened, paged through, pointed at, and possibly used as an accessory or a weapon.

So here is a list of the books that were most quickly (and often completely) destroyed last year, accompanied by my theories about why they were popular.

Ain't Gonna Paint No More by Karen Beaumont
Body parts!  I think that's the appeal of this book.  If my kindergarteners could read, I might think it was the rhyme scheme or the lying, but it's probably the body parts.  This is a book you could sing, the story of a boy who keeps promising he "aint-a gonna paint no more, no more, ain't-a gonna paint no more" ... and then he slaps paint on another body part.  Until he gets to his butt.  Then mom dumps him in the bath.  The illustrations are literally splashed with color, and the butt shot is priceless.

No, David by David Shannon
Shannon famously based the illustrations in this book on his own childhood drawings.  There's something freaky and a little disturbing about the giant-headed, snaggle-toothed kid who rampages through the illustrations, and I think kids sincerely respond to pictures that are slightly off.  They also don't have to read a word to know what's going on in this story.

The Important Book by Margaret Wise Brown
This book has a mirror on the last page--actually, on the end papers.  That's pretty much why kids love it.  They just love looking at themselves.  Happily, the book also has colored shapes for them to count, a pleasant rhyme, a reassuring message (the important thing about you is that you are always you, even as you change through the years), and pictures of deliciously cute kids in all shades.  Chris Raschka is a genius.

There was an Old Monster by Rebecca Emberley
This book is another singable one, and it might not have made this list if I hadn't read it out loud.  It's a little like "There was an old lady who swallowed a fly," in that the monster swallows a series of odd animals.  But the refrain is jazzier and includes a lot of scritching and scratching and monster dancing.  The illustrations are semi-abstract paper cutouts that I also use as part of a lesson on drawing as a way of recalling stories.  So maybe this is one that I kind of pushed on the kids, but it really got stuck in their heads, and I'm planning on buying more of Rebecca Emberley's beginning readers.

ABC Kids by Laura Williams
I'm pretty sure the popularity of this book is due to the fact that the U page has a picture of three kids in their underwear.  Little Mouse gets Ready seems to be popular for the same reason.

Wolf's Coming by Joe Kulka
This is one that kids like to look at in order to scare themselves.  The illustrations are weirdly Disney-like: you see a bunch of cutsey woodland animals running away and hiding as the Wolf, his teeth dripping with drool, approaches.  Like Little Red Riding Hood, the narrator lists all of the wolf's scary qualities.  Then, surprise!  We learn that the animals weren't running away at all--they were preparing a surprise party!  It's the wolf's birthday!  It never gets old.

Batman by Ralph Cosentino
The appeal of this book is obvious, and let it be known that this book disintegrated within two months.  I got the feeling that many of my boys were really trying to get information out of it, the way they do the vehicle books.  They studied the illustrations and asked questions about what was happening and who was who and then they acted it out.  Maybe other books about people they sometimes see on TV would be equally popular, but I like to think that these kids are already showing signs of geekiness.


I have to say one more thing in case anyone's thinking I just let my students do whatever they want with their library books: I do have rules.  I do teach book care, and then I reteach it and reteach it and encourage kids to report on each other like it's Stalinist Russia.  And most of my books are returned to the library in excellent condition.  So I don't encourage the destruction of books.  But I do study it.
Posted by xemilyx at 4:08 PM