An Ode to Honey I Love by Eloise Greenfield 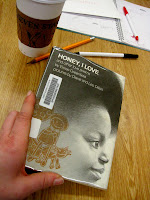 Teaching poetry to kindergarteners has made me realize three things:

1. I don't know how to define "poetry."
2. Kindergarteners do not recognize the letters "g" or "a" when they are written in serif font.
3. There is no children's poetry collection that has ever rivaled the amazing power of Honey, I Love by Eloise Greenfield.


I don't care what anyone says.  Shel Silverstein may write a dashing blend of silliness and profundity.  Jack Prelutsky may be able to conjure a rhyme for any word in the dictionary--and many that aren't in the dictionary.  But when an unruly crowd of six-year-olds is tumbling on the rug, give me Geenfield.  Every time.

Other poets will get kids to laugh, but Greenfield will get them to listen.  Her poems don't depend on a joke or a twist at the end (though I love Florian poems for often doing just that).  They aren't stories or jump-rope rhymes (except when they are).  They're poems.  They have their own reasons for existence.

Her poems are full of rhythm and rhyme, but they never get ricky-ticky.  In fact, while I can sit down and rattle off page after page of Mary Ann Hoberman without stopping for breath, I have to slow down when I read a Greenfield poem.  There are a number of different ways to read them--you can put the emphasis in different places and change the mood completely.  But the poems won't even let you read them in a steady iambic kind of way.  The lines often rhyme, but they aren't matchy-matchy.

They're a good step in the direction of poems that don't rhyme.  Not that you have to go there, but it's one way to extend kids' understanding of what a poem is.  Greenfield uses rhyme, but some of her most memorable lines don't rhyme.  For example, the end of the poem "Things."

I wish I could post all of the poem here, but I wouldn't do that to Ms. Greenfield without her permission.  However, you can hear Katie Davies recite it here, Ashley Bryan recite it here, and hear a bunch of kids recite it here.  And for the record, the way I recite it is completely different, rhythmically, from the way any of them recites it, which just shows you how alive and changeable Greenfield's poems are.  Actually, here's Ashely Bryan reciting it, just in case you don't feel like clicking anywhere else:

The last two lines don't rhyme with anything--that's after store, door, more, shore, etc.  You expect it to rhyme, but the end is unexpected and it doesn't match and it's perfect and completely memorable, yes?

But even later Greenfield collections pale in comparison to Honey, I Love (though "Nathaniel Talking" is a damn fine poem*).  I wonder if her commitment to the themes of her later books--a desire to make all the poems fit together--is what diminished the effect of each individual poem.  The themes in Honey, I Love range from playing dress up to being Harriet Tubman--and I defy you to read that Harriet Tubman poem without getting a little angry and teary at the same time.  Here's a young youtuber practicing the poem for a theater audition:

And finally, the book itself.  The 1978 edition.  Illustrations by the illustrious Dillons, a mix of childlike drawings and warm, smooth pencil sketches of radiant African-American girls.  The book is hand-sized.  I could slip it in my coat pocket.  Sometimes I am literally tempted to steal it from my own library.  Or I could just buy a used copy online, but that's less dramatic.  And it's that good. 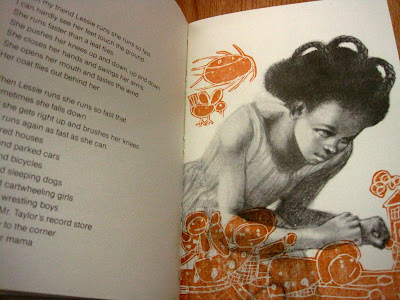 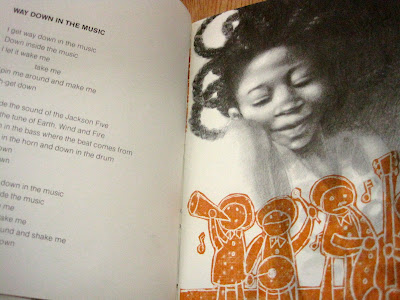 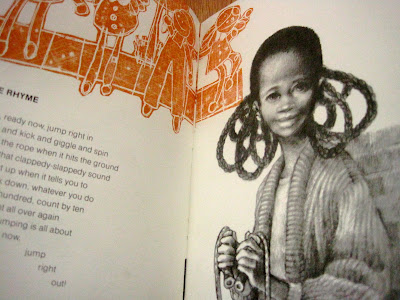 *You may also enjoy this rap video starring Eloise Greenfield.  Yep, you read that right.