But back to aliens.  I get that UFOs and extraterrestrials are the stuff of conspiracy theories and hoaxes, but what about the serious search for life on other planets?  If you had a book on this subject, where would you put it? 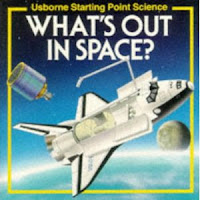 I actually have one alien book in my science section: The Mystery of Life on Other Planets.  Its call number is 576.8, which, according to dewey.info is "Evolution."  I get it.  Maybe a book about extraterrestrials belongs in Biology (570s) rather than Astronomy (520s), but that doesn't help me get the alien books closer to where I think kids will look for them.

Some of the local public libraries have alien books cataloged under 523.1, which is "Universe, galaxies, quasars."  I guess the theory here is that anything in the universe that doesn't get its own call number should be cataloged under "Universe."  In my own library, I have a book called What's Out in Space? that also has the call number 523.1.

But can we be more specific?  I know I want to put aliens somewhere in "Astronomy," so here's the hierarchy

This is the problem with using dewey.info (I love you dewey.info!) instead of one of those OCLC products.  I don't get to know what 523.13-523.17 indicate.  But, people, I work in a public school library.  I can't justify buying an OCLC product.  So this is where I fudge it.

A search of World Cat reveals that there are a lot of books about exobiology cataloged under 523.13.  That's what I'm going with.  That puts the aliens after books about telescopes and before books about our universe and our solar system.  I like it.  What do you think?

*Top photo from NASA.
Posted by xemilyx at 6:17 PM