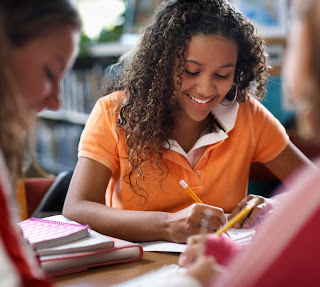 Around January of last year, I started using the phrase "writing collaboratively" without really knowing what I meant.  Actually, I knew what I meant.  But I was only vaguely aware that other people were using the term to mean something rather specific.

What I meant was that I wanted my students to be able to add to and comment on eachother's writing without doing any of the following:
What I was looking for was basically an online text editor that multiple people could type into at the same time, without a lot of complicated logging in.  That was my idea of collaborative writing.

But when I started looking for online tools to accomplish my goals, I realized that (hello!) collaborative writing is a Thing.  Seriously, just look it up on wikipedia.

So, about those tools I was researching.  Now, I already knew about Google Drive and I already knew about wikis (like wikidot and PBworks)*.  But both of those are a little complicated for elementary school students, and they require a certain amount of logging in, which is tricky with under-13-year-olds who don't have access to email at school.

But it turns out that there's a better option for creating single documents, and I am in love with it: Etherpad.  Unfortunately, it no longer exists in its original form.  Google acquired Etherpad, the first realtime collaborative text editor, in 2009, presumably because it would complete with Google Wave.  Etherpad ceased to exist and its users were invited to join Google Wave.  However, Google released the source code, and there are now a number of sites that use the Etherpad software.  So it's like it's been resurrected!

Of the sites that use the EtherPad software, I have two favorites: TitanPad and Twiddla.

TitanPad is super simple. It does not require a login.  Once you start typing, the site generates a web address.  If other people go to that address, they can start typing, too.  Each person's text is highlighted in a different color, so you know who wrote what.  There's no hierarchy of users, so one person can also strike out or delete another person's work, so you need to have a good working relationship!  You can also send each other chat messages while you're typing.  Those appear in a window on the right.

The only thing I did not like about TitanPad is that there are no copy, cut, or paste buttons on the toolbar.  You can use the CRT key, but I miss my buttons. 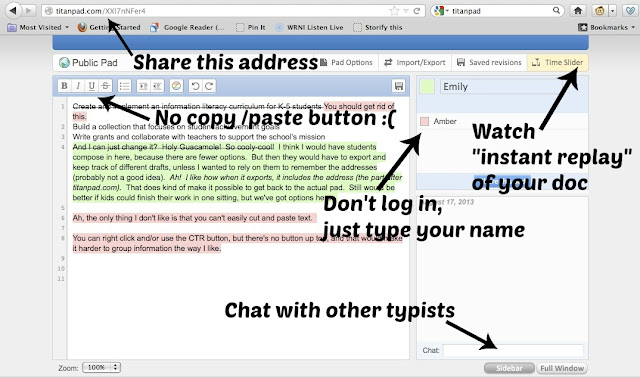 That's literally my only disappointment.  Everything else works flawlessly.  And you can export your document at any point into a txt, pdf, word, or html file.  Another cool feature is the timeslider which is like a motion capture of your document being created.  You can stop the replay at any point and save or export a specific version, as well.

This is great for students, because they can jump in and start using it really easily--no logging in or figuring out a tricky interface.  There's also very low risk of them losing a document, because they can either export it or just go back to the address where their pad will be saved for a generous amount of time.

Tiwddla is a bit more complicated than TitanPad and makes it more difficult for you to save your work (you have to login to export or take a screen shot).  But there's always copy-and-paste!  And this site also offers many more options for marking up existing documents.  In fact, I was delighted when I found it because I think it will make it a million times more fun to use my SmartBoard in the computer lab!

Tiwddla markets itself mostly as an online whiteboard and defaults to a pen tool that you can use to draw.  You can also call up a webpage or a document from your computer to scribble all over.  Or you can click the EtherPad tab and switch from the "pen" tool to the "browse" tool to start writing. 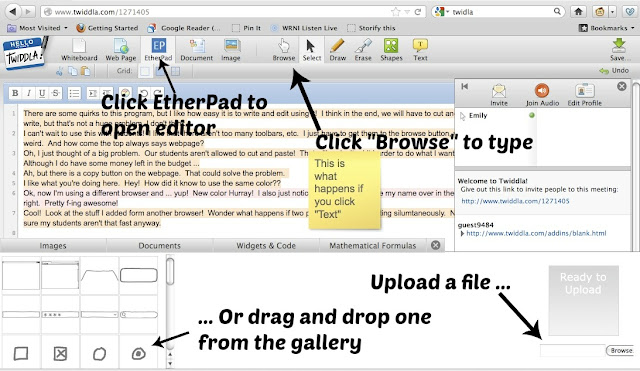 Take note: in order to get a normal cursor and start typing, you have to click the "browse" tool which looks like a hand.  That didn't make a lot of sense to me and I can see my students (who rarely listen to directions) struggling to figure that out on their own.

Your other tool options are a "select" arrow and a "text" tool which actually puts little text boxes on top of your document--it doesn't let you type on the EtherPad.  FYI.

Like TitanPad, Twiddla lets you chat with other users and even add audio so you can straight-up talk to them.  You can also upload documents and images to share.  It even allows you to add bits of code and mathematical formulas to your document.

So basically, Twiddla's a powerful tool for collaboration, but you're still limited in the extent to which you can create a final document without logging in.  It lets you do more, but there's a bigger learning curve.


I am super excited about using these tools with my students.  I think they will take me one step closer to my true dream of initiating a library resource which kids actually contribute to and maintain--like a small scale wikipedia for my school.  But that's a post for another day!

*Oh, and Padlet.  I like Padlet, but it doesn't result in a single document, and it's sometimes really slow to load.  But shout-out to Padlet anyway.  It's definitely in my rotation.
Posted by xemilyx at 5:45 PM