I haven't been here in a while, but I wanted to document my preparation for a recent storytime at the grocery store across the street from my library.  They were having a local food fest, and they asked me to offer a "local" storytime, with books set in Rhode Island or by Rhode Island authors.

I instantly knew I would read Blizzard, by John Rocco, but I was surprised not to find a list of other titles anywhere on the Internet.  So, here's the list I was looking for (also here on Goodreads): 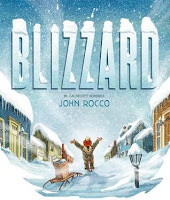 Blizzard by John Rocco
The author was a little boy in Rhode Island during the blizzard of '78, and he tells the story of how he put tennis rackets on his feet to walk to the store. Rocco's a recent Caldecott honoree, so you know the illustrations are fantastic.

Lost and Found by Bill Harley
This ever-so-slightly magical story of a boy who must brave the school's grumpy janitor to recover the hat his grandmother knit him is dedicated to the students of Paul Cuffee school.

The Bravest Woman in America by Marissa Moss
This picture book biography of a female lighthouse keeper in Rhode Island makes for an exciting adventure story! 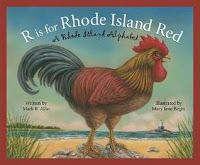 R is for Rhode Island Red by Mark R. Allio; illustrated by Mary Jane Begin
A classic ABC book. I didn't read this one straight through, but I had kids guess the words on some of the pages.  Their favorite page was "T is for Tasty Treats," with the Big Blue Bug.  This also provided tons of inspiration for future "local" storytime topics: pirates, carousels, animals in Naragansett Bay ...

Olga's Cup and Saucer by Olga Bravo
This is basically a vehicle for the recipes, but the illustrations are cute and it introduces lots of produce!

Black and White by David Macauley
Chris Van Allsburg and David Macauley are probably to the two most famous RI illustrators and RISD grads, although I don't believe either one lives in RI anymore.  However, David Macauley graduated from Cumberland High School, and his two murals along RI highways are still visible.  And this is a ground-breaking picture book.  Any excuse to share it is acceptable. (Also, Macauley's response to graffiti on one of the murals is kind of interesting.) 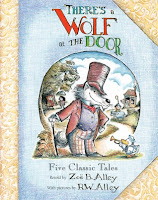 There's a Wolf at the Door by Zoe B. Alley, with pictures by R.W. Alley
The husband and wife team behind this oversized fairy-tale retelling in graphic novel form lives in Barrington.  You can probably find many books illustrated by R. W. Alley on your shelves. This one's a little challenging to read aloud, but worth it for the snappy humor and true-to-the-original plotting.  And you can just read one story and encourage kids to check out the book to read the rest.

Under the Sparkling Sea by Mary Jane Begin
I would only read this aloud to a pro-My-Little Pony crowd, but I mention it because it has two RI connections: Mary Jane Begin is a Rhode Islander who teaches at RISD and My Little Pony is owned by Hasbro, which is headquartered in RI.

And if you need more, just pick anything by Chris Van Allsburg.  Although he moved to Massachusetts a few years ago, he created most of his work while living in RI, and most kids are impressed when you say, "You know that book, The Polar Express?"