Booklists: What Would Suzy Bishop Read? 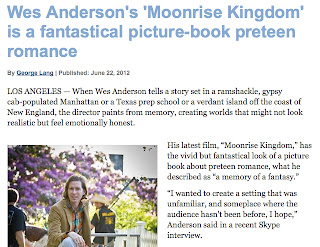 That headline (<<) made me smile, because although there are many meaningless phrases we use to describe categories of books (middle grade, young adult, what do they mean?), "fantastical picture-book preteen romance" is not one of them.

Nevermind, though: Moonrise Kingdom is a consciously literary movie.
It has a quaint narrator and obvious, meteorological foreshadowing.  But more important, it has two misunderstood and possibly violent adolescents running away together.  What's more literary than that?

The movie also features a small library of made-up books, which one of the runaways, Suzy, carries around in a suitcase.  They are, of course, stolen library books.  Because stealing library books is both badass and nerdy--a difficult combination to achieve unless you're a computer hacker.  I watched a video of the made-up books before seeing the movie and seriously considered packing my favorite childhood books in the suitcase I inherited from my grandmother and hiding it under my bed in case of emergency/apocalypse.

After seeing the movie, which is very clearly set in 1965, I wondered: what books might Suzy really have carried in her suitcase (you know, if she was real, also).  The first book that popped into my head was The Goats, by Brock Cole, because it involves children torturing each other, runaways, and islands.  But that wasn't published until 1987.  In fact, while lots of people have described Suzy's collection as "fake YA books," the YA category didn't really exist yet.

What books would have been available to Suzy that met her criteria?  I can't find the exact quote, but I know she said she liked books with some magical element, usually with a girl protagonist.  Here are some from 1965 or earlier that she might enjoy:

A Wrinkle in Time by Madeline L'Engle

Over Sea Under Stone by Susan Cooper

Weirdstone of Brisingamen by Alan Garner

Harriet the Spy by Louise Fitzhugh

The Phantom Tollbooth by Norton Juster

The Book of Three by Lloyd Alexander

The Wolves of Willoughby Chase by Joan Aiken

The Witch Family by Eleanor Estes


Books that were published too late to make the cut: From the Mixed-up Files of Ms. Basil E Frankweiler by E.L. Konigsburg, The Egypt Game by Zilpha Keatley Snyder, Escape from Witch Mountain by Alexander Key, I am the Cheese by Robert Cormier, The Planet of Junior Brown by Virginia Hamilton, The Midnight Fox by Betsy Byars, The Bridge to Terabithia by Katherine Patterson, The Wizard of Earthsea by Ursula K. LeGuin, The Wednesday Witch by Ruth Chew, Dragonflight by Anne McCaffery.

Also, does anyone remember what other characters carried around books in suitcase?  Besides Amanda Beale in Maniac Magee?

10 Fake Books in Movies That We Wish We Could Read at Flavorwire
Posted by xemilyx at 6:46 PM