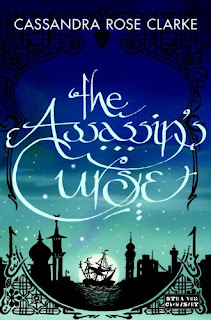 "I ain't never been one to trust beautiful people, and Tarrin of the Hariri was the most beautiful man I ever saw."

I had a good feeling about Annana, the pirate heroine of this novel, when I read that first line.  Sure enough, she was a loveable rascal of a narrator who made the pages fly by.  But when I got to the end of The Assasin's Curse, I didn't feel like I knew Annana or the other characters any better than I did on page one.


My major problem with the novel is that I never knew why the characters were doing anything.  Five minutes after Annana meets Tarrin, her husband-to-be, she decides she can't handle him, so she runs away from her beloved parents and the entire pirate confederacy with no plan and no resources besides the dress she's squeezed into.  I get that she's impulsive and she doesn't want to get married, but I don't really understand why she does something so drastic.

Then (speaking of drastic) despite the fact that Annana's escape attempt doesn't seem that impressive, Tarrin's family sends a magical assassin, the kind usually reserved for high level political killings, followed by an entire mechanical army just to wipe Annana off the face of the Earth.  Really?  Why?  And why does the assassin agree to take such a frivilous job?  And why does Annana save the assassin's life when he's about to kill her?  And why does she let him get away with not answering any of her questions?

Of course, a reader who doesn't feel the need to ask questions every 5 pages will probably enjoy this slim tale.  Annana really is a pleasant narrator, and this is the first in a series, so it's always possible the characters' motivations will start to make more sense as we learn more about their world.  Still, I've read adventure stories that made more sense.

This book fits nicely with my current interest in fantasy stories that don't take place in magical versions of Europe.  The story begins in a coastal town on the edge of a desert:


"The air in Lisirra always smells like cardamom and rosewater, especially in the garden district, which was where Captain Hariri kept his manor.  It was built on a busy street, near a day market, and merchant camels paraded past its front garden, stirring up great clouds of dust."

That suggests to me the Middle East or Northern Africa, but if it weren't for the unique animals and spices, this could be any coastal town.  There aren't any of those surprising details that really make a setting come alive.  (I could have come up with camels and spices on my own.)  And lots of geographic landmarks aren't even named.  They are just "the river," "the canyon," "the southern seas."

Interestingly, as the characters travel toward the North (which is apparently where the serious magic happens) the setting becomes more vivid, but also less Middle Eastern: "bone-gray twists of driftwood," pine needles crackling, white birds, green shadows, cold that "wrapped around me like an old, damp shawl," and trees "with crystalline leaves that clinked against one another in the wind."

Not only does the setting become more vivid in the last third of the book, but the entire story starts to feel real.  The tension between the characters, which should have been there all along, is suddenly palpable.  The choices they make seem both natural and maddeningly destructive.  And the danger around them gets freaking weird. In a good way.

The strength of the last third of the book doesn't entirely make up for the weaknesses in the beginning (and the middle).  It's not a stand-out title, but it's a serviceable adventure story for younger readers.  Although the main characters are older, there's only wistful crushes and some piratical cursing to contend with.  The book's strength is its narrative voice.  Its weakness lies in the whys and wherefores, so readers who value clever plotting in their pirate stories would be better off reading Deadweather and Sunrise.

The Assassin's Curse will be released October 4, 2012

Book source: Netgalley
Posted by xemilyx at 11:14 AM