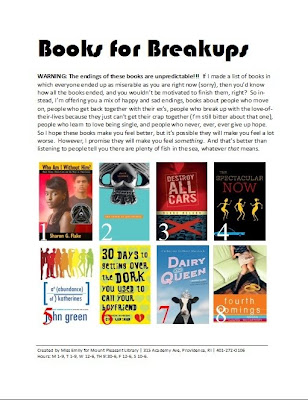 I have created another book list! This one is just a, um, what does wikipedia call it? A stub? A schlub? A stem? It's just a beginning. It has only 8 titles, and I'm sure there are more, but here's the "disclaimer" at the top:

WARNING: The endings of these books are unpredictable!!! If I made a list of books in which everyone ended up as miserable as you are right now (sorry), then you’d know how all the books ended, and you wouldn’t be motivated to finish them, right? So instead, I’m offering you a mix of happy and sad endings, books about people who move on, people who get back together with their ex’s, people who break up with the love-of-their-lives because they just can’t get their crap together (I’m still bitter about that one), people who learn to love being single, and people who never, ever, ever give up hope. So I hope these books make you feel better, but it’s possible they will make you feel a lot worse. However, I promise they will make you feel something. And that’s better than listening to people tell you there are plenty of fish in the sea, whatever that means.


Teasers after the jump.

1. Who Am I Without Him? by Sharon Flake. This is like a field guide to relationships. Each short story describes a different situation, some of them dreamy-romantic and some toxic. See if you can spot the bad and good relationships and predict what will happen to these girls—before you turn into one of them.

2. The Realm of Possibility by David Levithan. Imagine a high school where it doesn’t matter any more whether you’re straight, queer, bi, or so inexperienced you have no idea what you are. Everything’s normal. This novel reads like song lyrics from a concept album about a high school like that. Each section is narrated by a different character and everyone’s in love with someone else.

3. Destroy All Cars by Blake Nelson. One of the best ways to get over your ex is to channel your energy into something productive. Like saving the planet from carbon emissions. James Hoff is on a mission, and he’s seriously pissed that no one is as militant as him, especially not his ex-girlfriend Sadie, who he’s obviously totally over, because he keeps writing English essays about how lame she is.

4. The Spectacular Now by Tom Tharp. For Sutter Keely, high school is a parade of parties, girls, joyrides, and practical jokes. But when his “beautiful, fat girlfriend” kicks him to the curb, he gets serious for the first time—about a sweet, geeky girl. But it’s not like in the movies when the nerd gets a make-over and it’s all good. In this story, Sutter comes dangerously close to ruining the girl’s life.

5. An Abundance of Katherines by John Greene. After being dumped by 19 girls named Katherine, Colin is working on a math formula that can predict when relationships will end. But before he turns into a socially crippled math genius, his foul-mouthed best friend drags him on a road trip that promises to be as wild as anything on MTV.

6. 30 Days to Getting Over the Dork You Used to Call Your Boyfriend by Clea Hantman. This is exactly what it sounds like: specific instructions for what to do every day for a month to help you put that boy out of your head and your heart. It also includes movie recommendations and a list of girls who have been dumped more famously than you (and lived to tell the tale).

7. Dairy Queen by Catherine Gilbert Murdock. So do those Romeo-and-Juliet relationships ever work? Find out in this story about a girl from a family of football players who secretly coaches the rival town’s quarterback in between trying to keep her family’s dairy farm running while her dad recovers from an injury.

8. Fourth Comings by Megan McCafferty. This book asks you : Do you really want to be with him/her forever? Are you sure? Jessica Darling just graduated from college, but her charming former-addict boyfriend is just starting school. When he pops the question, she has to decide if her sweet, love-hate high school crush is really The One.