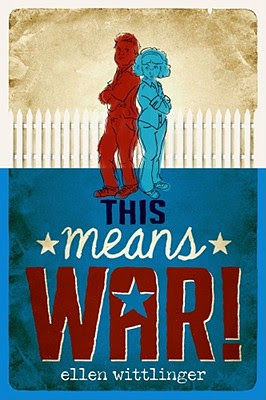 I've read a number of books by Ellen Wittlinger, and I acknowledge that they are good books, but I can't honestly say I liked them. I found her writing harsh, like she was trying to be mean to her characters. But I did like This Means War! I think Wittlinger really connected with her setting and time period, so everything that happened to the characters and all the things they worried about seemed to arise naturally from the comic books, news casts, and town gossip that swirled around them.

The story is set during the Cuban Missile Crisis, in a small town near an Air Force Base. The main character, Juliet, lives above her family's grocery store, which is threatened by the arrival of a local supermarket. But Juliet's primary concern at the beginning of the novel is that her best friend, Lowell, no longer wants to hang out with her, because she's a girl. Soon Lowell and Juliet are both entangled in a competition between the boys and girls in their neighborhood: ten tests of skills and bravery to prove once and for all whether boys or girls are the best.

It's the kind of kids game that parents never approve of. Each test is a little more dangerous than the last, and although most of the characters are aware that the challenges don't really prove anything, they all have their reasons for participating. I related most to Patsy, an Air Force brat who wants to be a pilot when she grows up and has no romantic interest in the boys. She just wants to beat them. I think this is one way girls cope when they hit adolescence and realize that people expect them to do certain things, but not others, and gender and sex become the most salient aspects of their identity. It can be a shock for a daddy's girl and a tom boy.

Lowell, on the other hand, doesn't really want to participate, because he's more of a brain than a physically dominant boy. But he suddenly feels like he has to prove his manhood. And that's part of the initial reason he rejects Juliet. The other characters have just as interesting stories, and together they reflect the myriad responses you get from kids when adult gender roles are suddenly imposed on them.

Juliet's narrative voice is wonderful. She's not a precious, off-beat character, she's a regular everygirl with a little bit of attitude, some big worries, and a deep longing for friendship. Her monologues to god are especially awesome:

"Dear God, I'd like to know if there's really a heaven, and if so, is it big enough for all the people who'd get killed by atomic bombs? Or would some of them have to go some place else? If you die when you're still a kid, do you get to grow up in heaven or do you stay a kid forever? Being a kid is okay, but I don't want to be one for eternity. If heaven is such a great place, I think we should be able to grow up if we want to. I would at least like to be a teenager."

The conclusion of the novel isn't perfect, but it is dramatic, which is important in a novel that escalates like this one. I think the author is occasionally preachy with the anti-war message, but **Spoiler Alert** she does bring Lowell and Juliet back together, which I'm grateful for. I'm conflicted, however, about Patsy's fate. It seems appropriate given her behavior, but it also reminds me of all the feminist literary criticism I read in college. I feel like Patsy is punished for being a wild, outspoken girl who doesn't obey the rules of feminine decorum, just like a character in an 18th century English novel. Maybe it was the burning barn--it reminded me of the mad woman in the attic in Jane Eyre. On the other hand, it might be more appropriate to compare This Means War! to other children's books as opposed to 18th century novels. So I'm not sure that point it entirely fair. **End spoiler**

As you can see, the book is meaty. There are lots of issues to discuss--I didn't even talk about peer pressure--but it doesn't feel like an issue book, because the competition is so gripping. And if I can say one last thing, the scene when Juliet visits the supermarket is brilliant. I often wonder how well kids can picture the setting in historical fiction, but I believe this scene does the trick. The author asks kids to imagine being shocked by rows and rows of canned goods, 10 different kinds of cereal, products they've never heard of (what's yogurt?), and 3 choices of toilet paper. I think that's something kids will understand, and it says so much about the scariness of prosperity and the ever expanding, interconnected world.
Posted by xemilyx at 7:37 PM