I continue to be behind the times with my booklists, but soon I will do something relevant, like "un-whitewashed books for fans of the Airbender series." This week, I made a list of books with mythological themes. Skulduggery Pleasant, the Thief, and the Alchemyst reference mythologies that are sort of vaguely related to the Greek and Roman canon, while the others are based on the same pantheon as Percy Jackson.

And look, I'm slowly remembering what I learned about design in college! 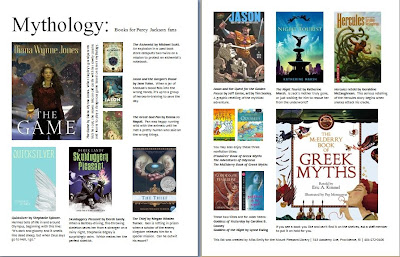 Blurbs after the jump.

The Game by Diana Wynne Jones. When Hayley’s grandparents kick her out, she moves into an old castle with her rowdy cousins and learns to play a dangerous game based on Greek mythology.

The Alchemist by Michael Scott. An explosion in a used book store catapults two twins on a mission to protect an alchemist’s notebook.

Jason and the Gorgon’s Blood by Jane Yolen. When a jar of Medusa’s blood falls into the wrong hands, it’s up to a group of heroes-in-training to save the day.

The Great God Pan by Donna Jo Napoli. Pan was happy running wild with the animals until he met a pretty human who said all the wrong things.

Quicksilver by Stephanie Spinner. Hermes tells of life in and around Olympus, beginning with this line: “It’s dark and gloomy and it smells like dead sheep, but when Zeus says go to Hell, I go.”

Skulduggery Pleasant by Derek Landy. When a Bentley-driving, fire-throwing skeleton saves her from a stranger on a rainy night, Stephanie Edgley is surprisingly calm. Which makes her the perfect sidekick.

The Thief by Megan Whalen Turner. Gen is rotting in prison when a scholar of the enemy kingdom releases him for a special mission. Can he outwit his escort?

Jason and the Quest for the Golden Fleece by Jeff Limke, art by Tim Seeley. A graphic retelling of the mythical adventure.

The Night Tourist by Katherine Marsh. Is Jack’s mother truly gone, or just waiting for him to rescue her from the underworld?

Hercules retold by Geraldine McCaughrean. This serious retelling of the Hercules story begins when snakes attack his cradle.

These two titles are for older teens:
Goddess of Yesterday by Caroline B. Cooney
Goddess of the Night by Lynne Ewing
Posted by xemilyx at 9:13 AM