I played with the Nook

I went to Barnes and Noble today to look at the Nook, and I was a bit enchanted. It looks a lot like an Apple device: thin, white, minimally labeled. It does say "Barnes and Noble" on it. It makes sense that it was B&N rather than Borders* that dove into the eReader field, because they were the store that crossed over into publishing with their line of classics. I believed they've also been at the forefront of in-store print-on-demand technology. 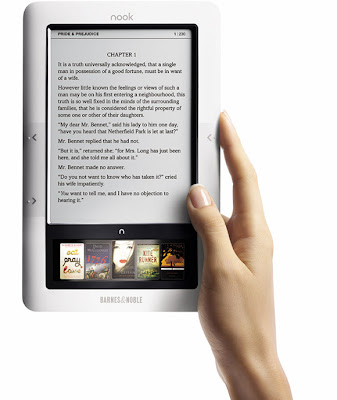 Anyway, the Nook has a mini full-color touch screen on the bottom, separate from the screen that displays the text of the book. This is best-of-both-worlds in that it you have a quick-responding touch screen menu, but the beauty of the E Ink display up top, unmarred by the extra layer required for touch screen capability. The touch screen definitely makes navigation faster than on my Sony eReader pocket edition, although the page-turn delay is about the same. There are forward and back buttons on both the right and left sides of screen, which give you more flexibility in how you hold it, too.

However, there is also just a little bit of a disconnect: for example, if you're looking at a list of the books in your library, you will want to touch the list on the main display, but instead, you must use the arrow and select buttons on the touch screen to open a book. You might stare at it stupidly for a second before you get it. But I think the pros of the mini touch screen outweigh the cons.

There are two other very interesting perks to the Nook which I would like to know more about:
What I want to know in both cases: all books? or just some books? I feel there might be hidden limitations. But I still find it quite cool. And did I mention that the Nook supports epub and pdf files? So you can use it to read DRM-free stuff.

The Nook is noticeably heavier than my eReader, but that seems reasonable, since it has a lot more going on. (Of course, it's also heavier than the Kindle, so the clunkiness is an issue.) It has wifi, although you can't surf the web as easily as you would with a touchscreen display up top. The internet access is mostly helpful for downloading books directly and reading stuff from feeds--text-based applications. I'm wondering if it will work well with Google Editions. You can download updates to the software (Does Sony ever do updates? Yo no se.**) from the website, which suggests the device will be relevant longer. There's a headphone jack and you can play audio, so I guess this also doubles as a gigantic mp3 player for "talking books." (Isn't that a lovely old fashioned term?) So it's one-stop shopping for all your reading related needs.

You have more control over the display than with other eReaders--you can change the wall paper, screen brightness, etc. However, I couldn't for the life of me figure out how to expand the size of the text.*** It must be possible, but it's not as easy as hitting the magnifying glass button on my Sony eReader, and I think that's an important accessibility feature--the ability to instantly make everything large print.

Another useful feature is that it comes with an AC power adapter, so you can charge it by plugging it into an electrical outlet as well as plugging it in to your computer. You can get an AC adapter for the Sony reader, but it'll cost ya $29.99 additional. And with the Nook you can expand your memory by sliding in an SD card. And it's $256, like the Kindle, while the Sony eReader retails for $200--of course, even the Sony website is selling it for $169.99.

So basically, if you want a lean, mean machine, I stand by my love of the Sony eReader pocket edition. But if you want something fancier, this is a lovely device, and B&N is doing much more than Amazon to give you the same flexibility you have with a physical book.

*But Borders is not so far behind! The Kobo ships in June.
**Yep. Just looked it up.
***OK, the website makes it obvious that it's possible, so it must be something so obvious that I missed it.
Posted by xemilyx at 1:17 PM