I am so annoyed that Kate Thompson's Switchers is not in print. 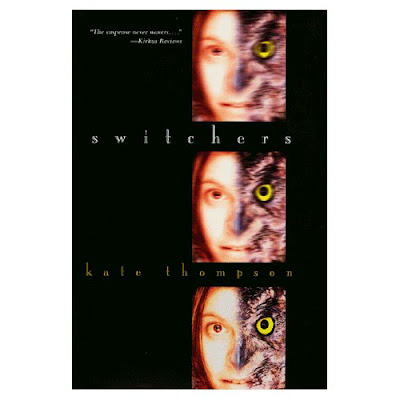 That's a cranky way to start a post. Sorry.

But seriously, it's such a great tweeny supernatural love story. I read it when I was 12 and I died a little at the end. I want to re-read it to see how it holds up, but I have too many new things to read, so instead, I recommend it to anyone who is looking for a vampire book for a 9-year-old who asks you for Twilight. Not that I don't just give them Twilight, but I do have my concerns. And I finally found someone who shares some of them--namely the made-up Indian tribe--which inspired me to suggest some alternatives.

Switchers is about two adolescents who turn into animals at inopportune moments. I feel like the novel was part of this eco-apocalypse trend in the '90s (not unlike the eco-apocalypse trend of the '00s), and there was some larger battle going on, but what I remember was the kids' tragic love, and the embarrassment of the switches, which had the feeling of those dreams in which you're randomly naked. I swear English authors can evoke ancient creepiness in a way American authors rarely do. (Because they're too busy being hip?)

I also like A Taste for Red, which I reviewed for SLJ, although as usual, the review was published with parts I don't remember writing. That's how it goes, I realize. I just can't bring myself to write a spoiler. The beauty of the book is how it makes you wonder if the main character is a vampire or just a maladjusted goth girl who insists on being called Svetlana.

And I don't like Dead is the New Black, but it's harmless. Just really, really poorly written. Clearly a book about high schoolers written for younger kids who should be reading the Sweet Valley High of their day if only there were such a thing. It's about vampire cheerleaders who suck your life force instead of your blood.

I also like to give the tweeny girls some Mary Downing Hahn, because in her books the bad boys are actually bad, as opposed to bad boys with hearts of gold. There's something wonderfully old fashioned about her books. They're like cautionary tales.

So these are all good choices. But mostly, I just want some publisher to reissue Switchers the way Delacorte has re-issued Silver Kiss (which is movingly creepy) and the way Simon Pulse has re-issued the Christopher Pike vampire series, Thirst. Because I love the '90s. And because that cover could use an update.
Posted by xemilyx at 5:59 PM