First, a rant about DRM

I got my eReader and it's splendid! But it's also true that DRM* is like an evil curse that has been cast on my device. This cartoon is my favorite depiction of how DRM can ruin your library experience (click to see it bigger): 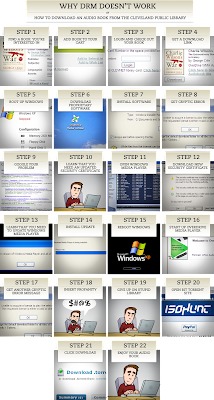 The comic is about downloading audio books, but I had a similar experience downloading my first ebook. Not that I wasn't successful. I was just a little disappointed that I had to download the Sony Reader Software and the Adobe Digital Editions Software and register with Adobe as well as download the ebook to my computer and then upload it to my device in order to read the ebook on my Sony Reader. Phew!

I was hoping to avoid using 6 different flavors of software to manage my ebook collection--instead, I was going to use Calibre, which is an opensource software program that works with many different formats (pdf, lrt, epub, etc.) and devices (Sony, Nook, etc.). However, ebooks that are DRM-protected won't always open if I send them to my eReader using Calibre.

Still, Calibre works well with anything that isn't DRM-protected, like the free classics you can find in a zillion places, and it does a few other cool things I'll mention in a later post.

It also purports to convert files into a format that's acceptable to your reader. This is important, because if I ever switched from a Sony reader to some other brand's product, I wouldn't be able to read things I downloaded in .lrt format (Sony's format). However, with Calibre I would be able to convert the .lrt files to .epubs or whatever else I needed.

Which brings me to another point: Download your ebooks from independent sites rather than the Sony store (I'll post a list of independent sites soon). Independent sites want their downloads to work on as many devices as possible, so they don't have much DRM. [Actually, I got lucky when I downloaded a book from subterranean press. Many independent sites have DRM, too--because the publishers insist on it. There's a narrow range of books that are offered in "multiformat," usually meaning they are DRM-free.]

The Sony store is like a jealous boyfriend. It wants you to only ever use Sony, so the store's ebooks have nasty DRM that won't allow you to, for example, read their ebooks using a different viewer on your computer (grrrrrr)--never mind a different portable device. I expect this would also preclude converting the books to another format.

So that's the anti-DRM commentary. Next I'm going to post actual tips on getting the most out of your eReader, but I had to get that out of my system.

*Digital Rights Management. It's technology companies use to prevent you from making copies of games, ebooks, DVDs, CDs, etc. However, it often forces people to stick with a certain line of products rather than mixing and matching, or sharing with friends the same way you would pass on a paperback you bought after reading it.
Posted by xemilyx at 4:13 PM