I recently did a RILINK workshop on literacy programs for boys, and I'm linking to the handouts here, since a number of people who did not attend were curious.

I read (parts of) a lot of books on raising and teaching boys in order to prepare for the workshop, and I've been mulling over these books ever since. (I was going to write a brilliant literature review of all the books, and then I discovered it had already been done better than I could have done it. Le sigh. I will confine myself to informing you that Michael Sullivan's Connecting Boys with Books relies heavily on The Trouble with Boys and The War Against Boys, which reveals something about his perspective.)

Most of these books present similar evidence for the crisis in boys' literacy:
What's different about the books are the causes to which they attribute these worrisome statistics. I was interested to learn, in Raising Cain, that there are only two well documented differences between boys and girls that are caused by nature as opposed to nurture. One is that boys are more physically active. The other is that girls develop language skills earlier. (A lot of you are probably thinking, duh. But isn't it nice to have studies confirm our observations?)

This provides an interesting explanation for why elementary school boys are consistently behind girls in most indicators of reading ability: they naturally develop language skills later.

So here's my question: if it's biologically normal for boys to be behind girls in reading, then why are we freaking out about the reading gap and heaping pressure on boys?

As I prepared for my workshop, I tried to remember the last time an adult had come in with a young girl and said, "Little Suzy Q is always checking out these short books with cartoons on half the pages and puns in the title, and I really want her to check out something that will challenge her."

And I realized the last time that happened was never.

Then I tried to remember the last time an adult came in with an eighth grade boy and criticized him in front of his siblings for reading Diary of a Wimpy Kid over and over and over instead of reading something "for boys his age."* 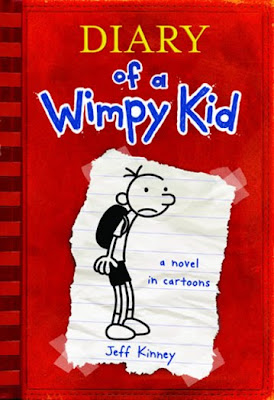 Oh yeah, that happened two days before I gave my workshop. And the boy, who used to come into the library every day, has not come since. His siblings say he's at home watching TV.

Can we have a moment of silence for the boy watching TV?

OK. On a more upbeat note, here's my solution to the reading gap issue: stop freaking out and just let boys read Captain Underpants and Franny K. Stein and Bone and Diary of a Wimpy Kid and Pokemon books all the way through middle school and figure they'll pick up The Spectacular Now or Marcello in the Real World when they're ready. I don't mean to flippant, but I think this is a good starting place. There's probably a lot more that needs to be done, but that's my suggested step 1.

Let me close with another anecdote: two weeks ago, a dad came in with his 14-year-old son and said, "My son has just finished reading all the Harry Potter books and we're so proud of him. Reading is like a new thing for him. The only problem is, we don't really know about other books for him. Can you help him find another series?"

I did not make that up. The line, "Reading is like a new thing for him," has been totally stuck in my head ever since. When stuff like that happens, I feel like I have the most important job in the world. Like I am holding the scalpel over someone's heart or auditioning for the lead role or cutting the wire that will diffuse the bomb. Because all of those bad boy statistics have convinced me that the moment in which I can recommend a winning book to a kid who has just opened his mind to reading may be a life-changing moment. And I want to get it right.

And if that means handing them Captain Underpants, then I will do so with my honor intact.

*Never mind the fact that Diary of a Wimpy Kid is about a middle school student.
Posted by xemilyx at 10:57 AM