"You had me at Japanese"

That's what one of our teens said to me when I tried to talk him into reading the largest book in our library, Miyuki Miyabe's Brave Story. I was all, "There's an abandoned building that hides the pathway to another world populated by scary talking animals and controlled by video-game-like rule--," and the teen was just like, "stop talking and let me check it out."

My conclusion: teens are fascinated by books by modern Japanese writers. Unfortunately, I don't have too many books that meet that criteria. I'm tha-rilled that Viz Media is translating and publishing Japanese novels under the Haikasoru imprint. I will finally have a follow-up suggestion for the rabid fans of Battle Royale. But since it may take a while to get all of those books on my shelves, I went and raided the adult collection and I found this: Real World by Natsuo Kirino. 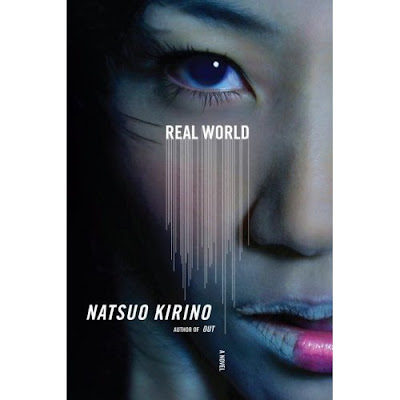 Great cover, right? Winning premise, too: A boy kills his mother and goes on the run. Four different girls, all friends but all with secrets from each other, help the boy in his escape. Each chapter is from the perspective of a different character.

The plot appears to be inspired by this real crime:

In 1997, a 14-year-old student from Kobe known by the pseudonym Sakakibara Seito beheaded an 11-year-old retarded boy with a handsaw and left the head at the entrance to his special school ... Although he had exhibited the typical psychopathic precursors to murder, including the torture and killing of animals, Sakakibara sent a letter to the police claiming to be the product of Japan’s system of compulsory education.

Scary. So in this title, the killer really does appear to be a product of the Japanese compulsory education system--he's not doing well at school and he's humiliated by his social-climbing mother and his distant dad. And I like how the novel gives you the "lunch room scene"* set in a modern Japanese cram school, where the cliques are quite different. This peek into the world of disaffected Japanese teens is occasionally interesting. But then the teens get so long-winded and philosophical about their disaffection that things get to be kind of molasses in January.

I'm not sure how many teens would read this title through to the end--although I think they might pick it up and enjoy the first part, in which the murder is committed and the boy steals one girl's phone and bike. The slow pace of the rest of the book is probably supposed to be naturalistic, and it definitely de-glamorizes the killing. But it also sucks the energy out of the revelatory scenes in which the girls share their secrets: one is gay, one hates her mother for having an affair, one sleeps around.

NYTimes review compares this book to Crime and Punishment. It reminded me of the reading Emile Zola's Therese Raquin, in which a couple is haunted by their partially successful murder attempt. Nothing is more depressing than partially successful murder. It certainly didn't remind me of Flannery O'Connor, who Natsuo Kirino says is her favorite writer. O'Connor delivers justice so much more swiftly.

*By "lunch room scene," I mean that part in the book when the author describes all the cliques in the school. Usually I complain about it because, hello, show don't tell. But in this case, it's appropriate, since the title is written for adults.
Posted by xemilyx at 10:04 AM