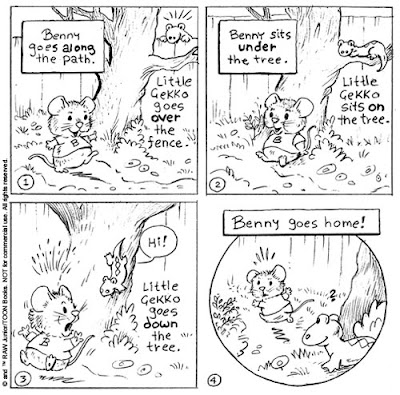 This is a program I've thought about doing a lot. Have you ever noticed how as kids get older, they never want you to do a program for them? Instead they want to help you do a program. But there are only certain kinds of helping that actually interest them.

The way this applies to story time is that once the kids hit a certain reading level, they want to read the words off the page before I say them. Which kind of drives me crazy. Which shows what a narcissist I am. But I've been thinking for a while about how to turn that into a program.

So far, I've imagined:
But I have yet to form this into a coherent program. Anyway, the reason I'm documenting this idea today is that there's a TOON books blog, and I think it might be an important piece of the program puzzle. How many ways could you use this at your library?
Posted by xemilyx at 8:19 AM