Review: You Don't Even Know Me: Stories and Poems About Boys by Sharon Flake 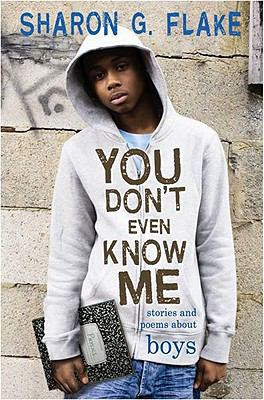 This is one of those books that I wasn't even planning on reading because I knew it would be good. I try to spend my time reading the books I'm not sure about or that I think I'll have to sell to kids. But I figured Sharon Flake didn't need my help getting kids to read her book, so I just put it on the shelf.

But I'm visiting a high school on Monday and I was thinking of reading a few excerpts from new books, so I took You Don't Even Know Me back off the shelf and proceeded to read it cover to cover. I figured I might as well write about it, too.

Now, Sharon Flake has great narrative voice. No question. But what makes her books so significant is the subject matter. She's just plain writing about stuff no one else is writing about. Like wanting to hook up with an older woman or trying to help out a 9-year-old who knows more about the streets than you do.

Sharon Flake definitely writes about issues--AIDS, suicide, sex abuse, and gangs in this volume alone. But she's never preachy, and I'm trying to figure out how she does it. But there's no one way. For example, in one story, she shows us what it's like to have a caretaker who's obese. It takes an hour and a half to walk a few blocks to the shoe store. You live on disability checks. You think everyone's staring even when they're not. I'm thinking the story is about how hard it is to live in a situation like that, but it turns out the story is about how good the boy has it--and he knows it.

Flake always keeps you guessing. Some stories end well and other's don't, so you genuinely wonder if the main character is going to do the right thing, and that keeps the tension high. Sometimes, like in the first story, you wonder what the "right thing" is. Should Tow-Kaye marry his girl? She's pregnant. He loves her. He loves her family. But he's 16. So's she. In other stories, Flake makes the "wrong thing" seem inevitable, like in "Girls Make You Weak," where the narrator begins with: "It was passed down to me. Just like my uncles' blue eyes, my grandfather's flat feet, and my dad's big nose ... The men call it the cheating gene."

And often, she keeps the tension high by threatening some kind of violence: "Gettin' Even" starts with a guy chasing the narrator with a knife. "Fakin' It" starts with crazy, 63-year-old Aunt Philomena trying to wrestle her nephew out of bed ... and just about getting punched in the face for it. Maybe that's all it is: Flake makes it real. She writes about issues, but the stories don't seem fake, like vehicles for the issues, because they're so immediate and full of detail. I guess any story could be an issue story. We just notice it when someone writes a story about an issue that doesn't often appear in YA literature.

Now, here's a good book discussion question: Why does the author pay so much attention to the setting in these stories? They're mostly pretty short, and you know she isn't wasting words, but in at least half the stories, you get a sense of the kind of neighborhood the main character lives in, and that's obviously important in a way that it wasn't in Who Am I Without Him?

And I haven't even talked about the poems. Actually, not all of them sent me. I'm still puzzling over "So She's White." The first three lines are: "Alright/So she's white/That's what I like." Then he goes on to describe the pride and respect she has for him ... or is it the pride and respect he thinks he gets from walking next to her? Should we take his line about being "king over me/Ignoring what you see" seriously when the only thing he tells us about his girl is that she's white? I guess the ambiguity could be intentional. It definitely makes me uncomfortable, as good poems often do.

The poems I like better are the ones jam packed with detail, like the title poem, and "Apology," in which a suburban black boy addresses his urban counterpart, apologizing for having it easy at the same time as he rips off urban style and acts hard when it suits him.

Basically, this is a compulsively readable collection of well crafted stories and poems. I do think that the urban location is important to many of the stories, and that it would be a really interesting writing prompt to have kids write the same story in another setting. Particularly if you were teaching this book in a suburban high school or in a community with lots of immigrant families. What would happen in your community if your grandfather was killed? Would people talk to the police? Would you get involved in avenging his death? What about if you got your girlfriend pregnant? Who would be around to give you advice? What kind of advice would they give?

Anyway, I could write about this book forever. I think it's a truly important title that's also a model for excellent short-story writing and a spring-board for discussion. I'm hoping someone I know reads it soon so I can discuss a few things with them.
Posted by xemilyx at 11:27 AM