Behold the beauty of my Twilight Readalike Booklist!

But now I have a color printer! I am unstoppable! And the blurbs are on the back! My dream is to print it on an 11x17 paper and make it foldable. But perhaps I should actually make it smaller? Anyway, blurbs after the jump. 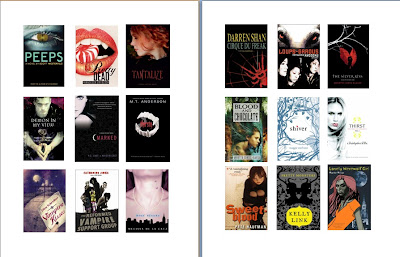 PEEPS by Scott Westerfeld
Now that Cal’s infected with vampirism, he has to track down his ex-girlfiends before they turn into blood fiends.

PRETTY DEAD by Francesca Lia Block
After hundreds of years of looking like a china doll and dining on human blood, could Charlotte be turning back into a human?

MARKED by P.C. Cast
Zoey has been chosen for the House of Night, where she will either learn to be a vampire or die in the process.

THIRSTY by M.T. Anderson
In a town were vampires are lynched, Chris strikes a deal with a shady angel in hopes of reversing the change that’s coming over him.

VAMPIRE KISSES by Ellen Shcrieber
When a darkly handsome boy moves into the mansion in Raven’s small town, she hopes he’s a vampire … or at least a kindred spirit.

THE REFORMED VAMPIRE SUPPORT GROUP by Catherine Jinks
You think vampirism is sexy? It's an addiction! Fortunately, there's help. And with vampire killers on the prowl, you’re gonna need it.

BLUEBLOODS by Melissa De La Cruz
Among the rich Vampire families of New York, future mates are determined by past lives. But not everyone is playing by the old rules.

CIRQUE DU FREAK by Darren Shan
When two friends visit a freak show, their fascination with the dangerous spectacles turns them against each other.

SILVER KISS by Annette Curtis Klause
Only Simon understands Zoe’s grief over her mother’s illness. But Simon has is own needs: Revenge. Blood. Help.

BLOOD AND CHOCOLATE by Annette Curtis Klause
Teenage werewolf Vivianne is developing a sweet romance with a human boy, but the hot, motorcycle-riding Alpha male of the pack wants her, too.

THIRSTY No. 1 by Christopher Pike
Alisa is a responsible vampire who feeds but doesn’t kill, but when her maker starts stalking her, she starts to lose control.

SWEET BLOOD by Pete Hautman
Lucy, a diabetic, is fascinated by vampire myths, but she’s suspicious of a stranger who contacts her online and claims to truly drink blood.

PRETTY MONSTERS by Kelly Link
A collection of stories in which dead girls crawl out of their graves, handbags are passages to other worlds, and werewolves beg you to save them from the moonlight.

LONELY WEREWOLF GIRL by Martin Miller
Here’s a tip: never cross the Scottish werewolf clan. Outcast Kalix is living on the streets, when her own mother sends bounty hunters to cut out her heart.
Posted by xemilyx at 11:11 AM